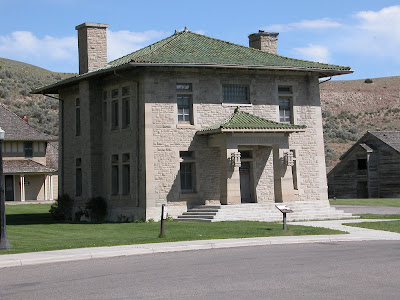 We got up fairly early and drove north to Mammoth only stopping a few times. We had already explored much of the road north anyway. We got a campsite close to town at the NPS area and went back in town for breakfast. What a great little town. Mammoth was really the first facility in YNP and has a long and interesting history. The town was first an early army facility and clearly shows those roots. It was, in fact, the first facility in YNP - first called Fort Yellowstone.

For the decade after 1872 when Yellowstone National Park was established, the park was under serious threat from those who would exploit, rather than protect, its resources. Poachers killed animals. Souvenir hunters broke large pieces off the geysers and hot springs. Developers set up camps for tourists, along with bath and laundry facilities at hot springs. Civilian superintendents were hired to preserve and protect this land from 1872 through 1886. The good intentions of these early administrators, however, were no match for their lack of experience, funds and manpower. Word got back to Congress that the park was in trouble and legislators refused to appropriate any funds for the park's administration in 1886.

The Army came to the rescue and in 1886 men from Company M, First United States Cavalry, Fort Custer, Montana Territory under Captain Moses Harris came to Yellowstone to begin what would be more than 30 years of military presence in Yellowstone.The first buildings of Fort Yellowstone were finished by late 1891. As more troops were needed, more buildings were constructed: officers' quarters, guard house, headquarters, barracks for enlisted men, stables for their horses and non-commissioned officers' quarters. In 1909, Scottish masons began constructing sandstone buildings here - among them the Albright Visitor Center (then the Bachelor Officers' Quarters) and the administration building (then a two-troop barracks for 200 men). The Chapel, the final building constructed during the Army's tenure, was also constructed of native sandstone. The stone from these buildings was obtained from a local quarry between the Gardner River and the Mammoth Campground. 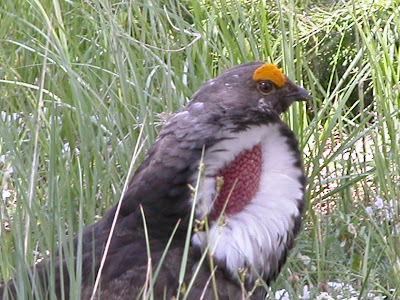 The Army did much more than provide a police service. They built roads which still exist today and those roads are the first roads in the country build to a specification. The square building was the engineer's office.

The town is a nice little place, but we were keen on a hike . On the way there we saw a small brown bear. Still looking for the big grizzly! There was a trail leading to Albright Peak close to town so we set out for that. It was a hot day and a somewhat long hike, but we had a good time. One of the highlights of the day was running into a male blue grouse in a bit a mood to show off. He put on an awesome show and we frequently got within several feet of him to see it. Check out the pics on this guy in the slide show. He has these orange-yellow eye patches that make him look angry all the time - they have issues.

We also found a nice set of elk antlers. Their size on Bridger quickly illustrates the actual size of an elk. This is a big set. 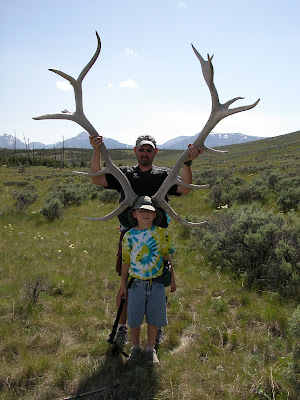 Other than that it was a fairly

uneventful hike. We finished and drove out of the park a short distance to Gardiner seeing another ungulate to add to the list - mountain sheep. (actually, Bridger did keep a running list of all the animals we saw - it became quite a list) It is one of the roughest towns I've ever seen, but we had good pizza. On the way back we spied a swimming hole/hot spring which we intended to hit up first thing in the morning. I must mention the massive north gate. It's quite a structure and a very large stone embedded in the top states, "FOR THE BENEFIT AND ENJOYMENT OF THE PEOPLE", and we were!