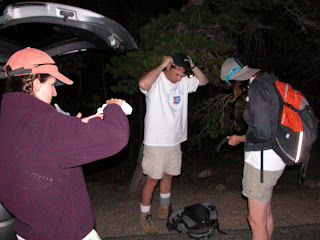 (Blog Note: the vacation posts have been once again interrupted for, well, another a small vacation - I'm still working on them though!)

Named after Major Stephen Long, who explored the area in the 1820's, Longs Peak rises to 14,259 feet (4,346 meters) above sea level. Ross (who is a very good friend of almost 30 years) and his wife Leigh, along with Tammi and I, set out to climb it at the end of a several day visit. (Ross and Leigh live in Green Bay at about 594 feet above sea level) It was a real pleasure to see them again and I'm very thankful they made the drive. 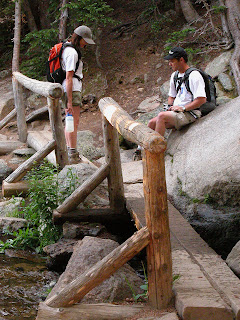 It was a little later than I had planned. Upon signing in at the trailhead, I counted 175 people signed in ahead of us that weekday morning . It is an incredibly popular climb. A recent article noted that, "In the summer of 2002, the latest year for which figures are available, an average of 300 people departed the Longs Peak trailhead on weekdays and 675 on weekends." The park service is working on the problem.

The route to the keyhole is a mostly easy trail that works its way up through the treeline from the east and then circumnavigates the mountain to the north. The keyhole lies on the north ridge. At the start, I tried to get us off quickly, as there is always a short adjustment period, but the elevation was too much. Ross and Leigh had been walking a lot in Wisconsin, but it just isn't the same - it was also Leigh's first "climb", and as such everything is unexpected and a little harder. It is a rocky, steep trail. Ross & I have climbed together hundreds of times, and indeed, we had tried to climb Longs on January first one year, but were quite literally blown off by a winter storm. It was the first time I have seen a mountaineering tent flattened by the wind - just like a pancake, ceiling on floor with Ross and I being the trimmings.

I can't resist a small historical note: The first known explorer to climb Longs was John Wesley Powell in 1868. The name-sake of Lake Powell - explorer of the Colorado River and much, much more. His fascinating life is portrayed in the book, "A River Running West: The Life of John Wesley Powell". It is a great read and a unique American life spanning from the civil war (were he lost his arm) to the establishment of the USGS (by Powell) to the halls of congress; who even at that time failed to do the right thing because of political chicanery and stupidity. Water rights being a low water mark.

I don't know the route Powell used and I don't believe there is a description, but he climbed it from the west (camped near modern Granby Lake - a reservoir build in the 40's for the front range. An area first explored by Jim Bridger who found nearby Berthoud Pass in July of 1861.) so I suspect he used the slabs on the last section of the regular route - the route we were using. But he did some amazing one-armed climbs along the Colorado River cliffs during his explorations, so based on that, he may have climbed something harder.

Once the trail ends, the boulder field begins. F 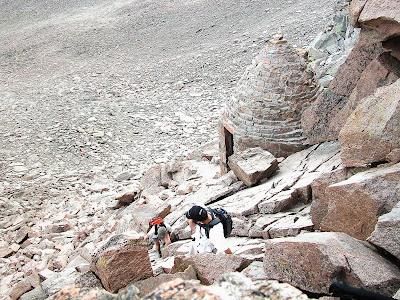 or those who have never been in the mountains, the boulder fields are almost beyond imagination. In this case, a picture is worth a thousand words. The small beehive building in the picture was built as a memorial and shelter in the 40's for a woman named Agnes and the man who died trying to save her. Once we made it to the keyhole I think Leigh was seriously considering 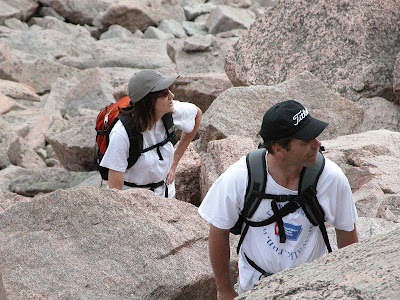 turning around, but she continued on. It is always hard to judge if it is good to push someone or not. I know people always look back and seldom regret having been pushed, but if someone is really tired pushing them can be dangerous too. There is never a right answer and I never know which way to go, but on she went.

I must say the route along the back of the mountain is stressful to the novice. There is some big exposure, which in, and of it self, can fatigue the body. 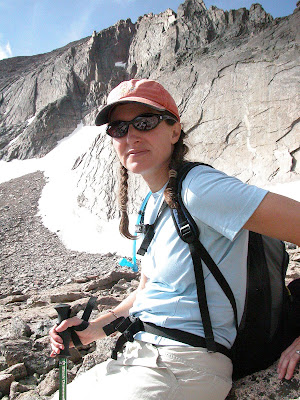 Being tense is a main ingredient in the recipe of, "I'm wasted, let's go back". The route traverses the steep west flank of the mountain for about half-a-mile. It is relatively safe, but exposed, rough, and scary to those unaccustomed to height. Once across, the route goes up a broken down and rock strewn coulier. It is steep, nasty, and loose; and about 1000 feet tall ending in a narrow rock ledge that traverses the south face. The ledge is sometimes about 4 feet wide and isn't for those afraid of heights, to put it mildly. By this time Leigh had pushed herself beyond that for which she was capable, and we still had to return to the car! So, we turned around about 300 feet from the summit with weather threatening. It was about 11:00. She should be very proud of both her preparation and the outcome. Maybe some other year. I feel our late start attributed to the lateness of the morning too and that was my fault.

The return to the keyhole is no easier than the trip in and I know everyone was relieved to finally hit a trail. We booked down the trail at a good clip arriving at the car after 11 hours of hiking and climbing. We motored to Boulder and ate like little piggies with Ross buying dinner for all. I hope fun was had by all. 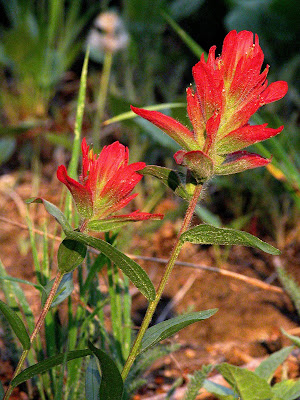 For me, the weather, the company, the views, and the flowers were impeccable.

Labels: books, get out there, western history