Shop - design and a cabinet 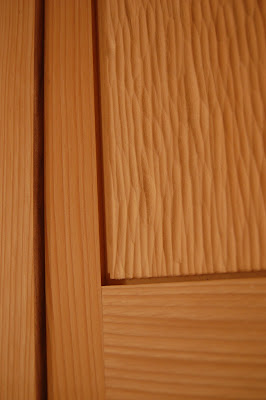 Producing interesting new work is generally accomplished by pushing one's boundaries, experimenting, and focusing on the creative process; however, the goal is seldom attained on each new project. (Sometimes, ideas seemingly explode out of nowhere, but those ideas are often hatched from some latent genesis - read"Blink" by Malcolm Gladwell) We tend to move forward in fits and starts; thinking, applying the knowledge of our errors, contemplating what-ifs, acquiring new skills, and infusing new views into our vision.

I have completed several recent projects which have included design elements that I wished to incorporate into some new work - a kind of uber project which includes all of my recent ideas. I got the impression of a wall cabinet with exposed joinery. A modern piece; tall and thin with compartments, drawers, and cubbyholes. On a recent trip to San Antonio I had some time to draw and flesh-out some of the details. After quite a few pages of doodles I had a workable design and I liked it so much that I thought I would make two and try to get one into a show or gallery. On the way home I ran into such a gallery owner on the plane - how convenient! Yes, I did get her card.

I generally draw my projects in CADD and work out all of the dimensions; 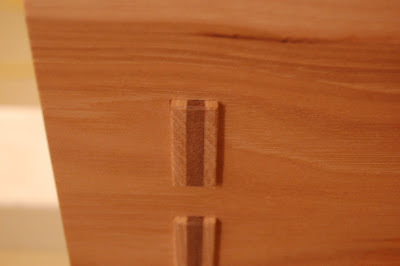 however, with this cabinet I only sketched all the parts and pieces and then went and found the wood. I was thinking of hickory with walnut details as I was looking for high contrasts and unusual grain. This time I let the wood dictate the size and to some degree inspire the details.

There's a story in all this. In the midst of building this cabinet I was digging through the stacks in the library at Colorado State University in Fort Collins and found a book by Krenov. I was vaguely aware of him, but never studied his work. I was fascinated, his work is beautiful, his process seemingly renown, and I found, unknowingly, my cabinet was very much in the vein of his work. My work most 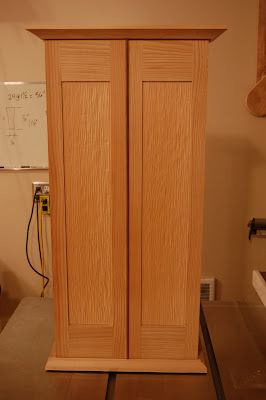 likely mirrors his because he has so strongly influenced fine wooodworking today. I went on to read about him. He was very influential in establishing the studio craftsmen movement and especially the high level of skill with joinery which very much defines the best work now produced. I have unquestionably inherited those ideals and strive to attain that mastery.

Here's what he said about design; " ... however some of us may be able to sketch or imagine things in our mind, there are surprises, and problems, when it comes to the the work itself. We may have a fair idea of how we think a piece will look and may even make drawings, yet there are certain aspects in the nature of various forms and proportions - and especially in the material we work with, wood with its own graphic messages - that turn the whole process of working from a matter of certainty, or even rather definite suppositions, to a series of adventures that takes us from one uncertainty to another, with hopes of reaching a turning point." 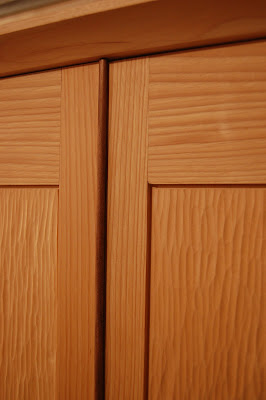 I'm working toward more of a journey with my designs - it makes a pleasing destination and the time spent along the way is focused, intense, and ingrossingly serene.

I still have to make the inside of this cabinet and it is still unfinished, but I include pictures to illustrate what Krenov said, as it is what I experienced.

So far the joinery includes; through splined tenons, mortise and tenon - frame and panel doors, tapered sliding dovetails and tongue and groove back.


For now, I'm content to walk out to the shop and see if the piece works. To see if the proportion likes the low light, the bright light, the shade. To perceive what one might expect when it is opened. To find the shape of the handles while I wonder around my imagination and hover over my old and worn bench. 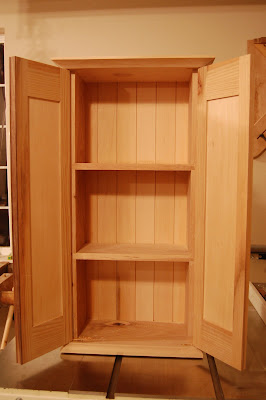