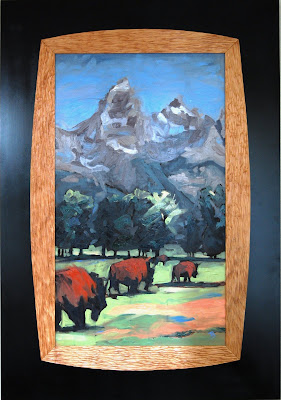 Tammi painted a landscape for me from our Yellowstone vacation of which I'm very fond. This picture does not do it justice, but you'll get the idea.

Early one morning near the end of our vacation we packed up and headed out and the buffalo were heading down to the creek for an early morning drink. The Tetons were still hazy in the morning light and the breath of beasts hung in the air. It was a perfect scene and one I will always remember. Some of the pictures from that morning are on this post.

The painting itself is about two-foot wide and almost four-foot tall, so it's a large work. The painting has been drying for a while and I've been contemplating how best to frame it. I wanted to reflect the ruggedness of the Tetons, but give it a modern feel too. Both aren't easy to accomplish. I've been milling over the design in my head for quite some time. I was all over the place, but I had one overriding idea. I had a piece of beautifully-grained fir that seemed perfect for the piece, but I wanted to push the rugged idea a bit and create a feeling of roughness. I randomly worked the surface with a 1/2" gouge - this took about 3 or 4 hours. I knew it was exactly the look I wanted as soon as I had a small section done and it looked great against the strong grain of the fir. Keeping the gouge sharp and not splintering the splinter-prone fir was quite a challenge, but it was easy to go over the many splintered areas again. That done, I kn 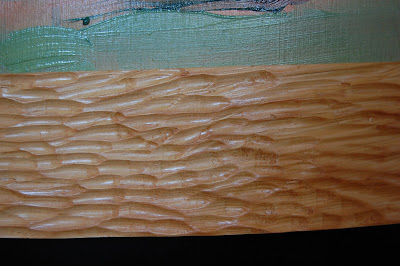 ew I would have to combine the rough look with something smooth and I worked with numerous ideas - a different grained wood, using the fir as a band, inside, outside, similar to a mat, and many more.

I played around with some of my ideas and finally put some of them into CAD. I came up with this. 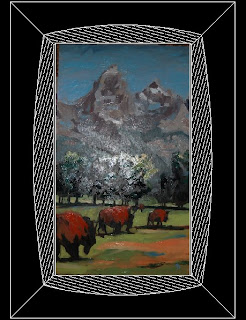 I switched the fir from being lower than the surround to being on top of the surround. I still was unsure of the colors of everything. I initially envisioned the rough fir being stained about the color of the buffalo with the surround being very light using a grainless very even wood. I began shaping the fir.


I cut the straight edges to round forming a gentle curve along each side. I then beveled the back so that the rough board would appear to float over the surround. 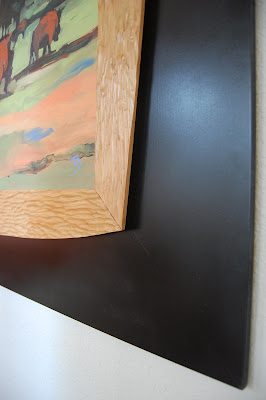 This created the inside. I wanted a contrast to the roughness of the fir and thus went for something very smooth - I used MDF. I spray painted it black and then gave it a coat of polyurethane. I used a varnish-tung oil mix on the fir. When it came together, I had three nice contrasts; the light and the dark, the rough and the smooth, and the round and the straight. I was quite happy with the results and will no doubt play with this design in the future. It is quite striking and shows off Tammi's work very nicely.