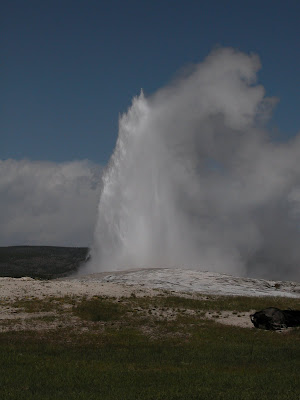 We got up early in Colter Bay at Jackson Lake in the Tetons to head for Yellowstone. We didn't have grand plan, but we did know that camping spaces were often limited. We also had to be in West Yellowstone to meet a friend at a certain time so we wanted to head that direction to ensure we had a camping spot. Our usual "camp anywhere" approach doesn't work in Yellowstone. The drive up somewhat follows the Snake River whose headwaters are located in Yellowstone. It eventually becomes the main tributary for the mighty Columbia River and then flows into the Pacific. The lower Snake was first explored by Lewis and Clark and was first known as the Lewis River. Most likely Colter was the first to explore the upper Snake and the road would have roughly followed his route - at least in Yellowstone Park.

The southern entrance road is heavily forested with lodgepole and is not particularity scenic. We crossed the Continental divide three times at about 8000 feet (now eight times total) and dropped down into Old Faithful. It is, or course, a must see, but because of the number of visitors everything is "sterile", and there are people everywhere. Old Faithful was awesome and we enjoyed the surrounding geysers and springs, but I must say we enjoyed the back-country hydrothermal features a lot more.

Ok, now it's time for your geology lesson. In order to really appreciate, see, and understand Yellowstone it is necessary to understand the geology. The most striking, and obvious aspect of Yellowstone is the relative nearness of magma to the surface. 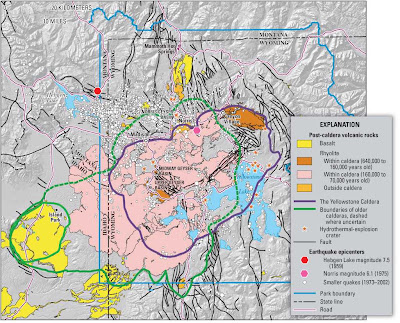 Yellowstone is located in an active Caldera - yes, I meant to say active. That is, of course, in geologic time. Parts of Yellowstone have risen more than three feet in recent years due to the magma chamber located under Yellowstone rising. Of course, the theories as to why and how are all simply conjecture, but the end result is undeniable. The past, also undeniable, and is etched around most of the lower 48. What is located under Yellowstone is called a "hot spot". Such hot spots are located around the globe and include places like Hawaii, the Galapagos, and Iceland. The volcanic activity has nothing to do with plate tectonics - they are simply places where earths crust is "thin". These hot spots "move", or at least the crust moves in relation to the hot spot, and the Yellowstone hot spot has moved also. This is referred to as a hotspot track. The old calderas can be located on a west-south-west line stretching across the western US.

You may have noticed that I referred to the Yellowstone Caldera affecting most of the lower 48. Some of the older eruptions may have snuffed out most life in the entire US with an order of magnitude somewhere around 2000 to 3000 times that of Mt. Saint Helens. Ash was deposited many feet deep for thousands of miles. 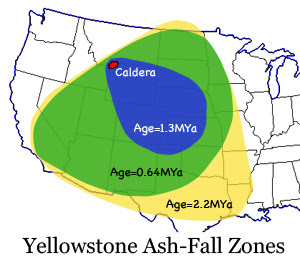 What wasn't wiped out by the initial event was killed by a "volcanic winter". The most recent, the Lava Creek eruption, occurred about 640,000 years ago and deposited tuff now about 1000 foot deep locally. (Tuff is consolidated ash with all kinds of volcanic material mixed in)

The complete picture of the volcanism is complicated and beyond even what I want to read about, but this quick outline should give you some idea about this supervolcano. It is not completely understood and is still studied extensively, but the point is that it is massive - wipe out the entire US in a heart beat massive.

The next interesting thing to know about Yellowstone geologically is the two most recent glacial periods and the effect on the topography. Perhaps it is first best to know what these glaciers were not. They were not alpine (or piedmont) glaciers and they were not continental glaciers. They were ice caps similar to modern day Greenland. Again, the scale exceeds our ability to readily imagine the size. The Pinedale Period (the most recent) wasn't that long ago (about 25,000 years at its peak), so the marks are still very clear on the landscape. Although there were many glacial periods we can only really see the last two - the Pinedale and Bull Lake. They are similar, but the Pinedale partially obliterated the Bull, so I will discuss the Pinedale Period. 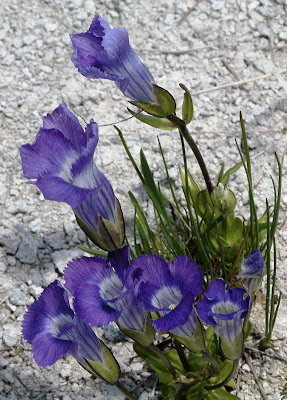 If you went back to the peak of the Pinedale Period and stood on the Grand Teton you would see the terminus of the ice cap that covered Yellowstone. The entire valley would be covered by glacial till (rocks and silt), glacial melt would be cascading off and thundering from under the ice and immediately creating a river much larger than the Snake is now. The mountains of gray silt and the bolder fields would almost be uncrossable. Descending and walking north you would be walking on only the glacier - quite steeply at first, then almost flat. Standing in the center of Yellowstone you would have about 4000 feet of ice below your feet. The only visible land would be the Absarokas to the north. You would have to walk several more days back down the glacier north to escape the ice, and you would have traversed about 120 miles. The ice cap was enormous and all of the features it left are easy to see today - eskers, kames, terminal and lateral moraines, glacial striations, drumlins, erratics, and many other things. 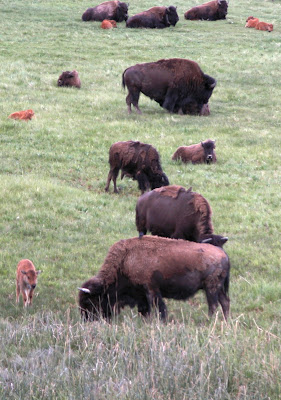 There is one place in Yellowstone Canyon that has one of the best geologic views I have ever seen. As you look across the river cut (almost a slice) the far side has glacial till many feet deep on the top. Immediately below that is about 60 feet of basalt that formed in hexagonal columns. These are always neat just by themselves. These dark columns lie directly upon another layer of glacial till - really round stones of about equal sizes surrounded by glacial flour. The layers mark a period of glaciation, a period of volcanic activity, and another period of glaciation.

Back to the trip. We drove west, toward the west entrance, stopping at every pullout to check out the geysers, springs, and thermals. They are really awesome, and we took about 100 pictures. We camped at Madison Junction walking around the meadows and checking out the buffalo before turning in. We were to stay here three days so we set up the tarp, cuts lots of wood, set up an extra tent, and generally made ourselves more home than usual.