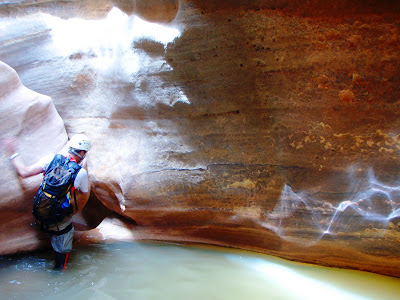 Tim slid down the chute feet first. Now, there was no going back, no return. The lip was four feet above the black pool and there was no way to reach it once plunged into the darkness. The sides were slick, polished, and beautiful. The pool opened at the opposite end into a slot; a narrow, deep, twisting slot just as dark and beautiful as the pool. Somewhere the slot opened up, somewhere unknown.

When Tim plunged in he took a moment to surface and I heard the slight panic, the thrashing, the unmeasured breaths. I felt the tension. His struggle lept off the walls and echoed down the canyon. It lasted a while and stopped and then between deep sucking breaths I heard, "It's cold."

We had been hot - very hot. We had covered the three-miles up the canyon with all of our ropes and gear in about a half-an-hour and it had been difficult to get into the deep part of the canyon, now several hundred feet above us. 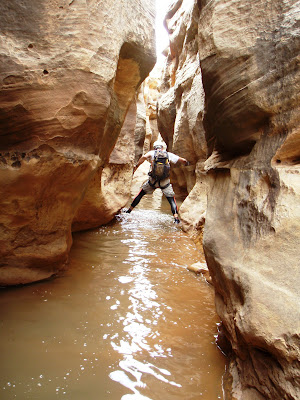 After walking the ledges we had repelled and then down-climbed into the deepest hole. The world changed. Gone was the ragged, wind-eroded sandstone. Replacing it were the sensuous curves of this half water world; elegant, towering, twisting, fantastic; irreducibly complex - horrifyingly simple.

I slid down the chute. I struck and forgot everything. The hole was numbingly cold and the shock from sweat to freezing was instantaneously alarming - panicking. I had perhaps ten-pounds of gear on and my feet found no bottom, my hands no grip. Air seemed in short supply. The channel was too narrow to swim. A frantic dog paddle found another curve and another. Then the narrow opened, my feet found a bottom and Tim stood at the end laughing....


I clearly remember walking down the trail after climbing all day at Seneca. Gear jingling, laughing, fooling around. It was 1993 and we were single. Besides work, we climbed. I perfected lead-climbing and Tim learned rope work, gear placement, and the craft of climbing. We ate pizza at the general store and drank too much in the evenings around the fire. They were the best days.

...The valley lay below, far below. The truck, perhaps a mile away, appeared as a speck. Only a few feet separated me from the summit of Six Shooter, but the move was committing and the fall not very appealing. A smear, an incut hold, and a mantle was all that remained, but I didn't like the smears on red sandstone.

Earlier, I had slipped on a very solid layback; the sandstone shoving my foot downward, and now I was thinking about the consequences of a fall. On lead, I sometimes go up, then down, and up again, testing, feeling the holds, readying myself for the moment when I move up regardless of what lies above. I yelled at Tim, "Watch me." I torqued my foot onto the soft rock and climbed. The moves were easy. I stood and nothing else was above me.

The top was about the size of a good Thanksgiving table. To the south the Abajo's broke the deep blue sky. To the north, the LaSalles, fresh with new snow beamed white against the red rock of Indian Creek. To the west, Canyonlands, The Maze, and Needles lay all around. I readied the ropes and brought Tim up. We had climbed as one; connected by the ropes, by our long friendship, by the trust forged in our many adventures. The rope; our bond, our suffering, our tears, our easy laugh, our deep friendship. 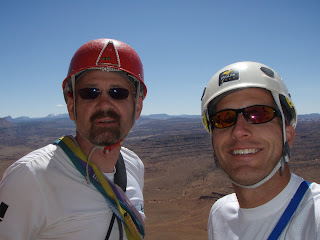 Desert spires are special. These unique summits give only after taking, but leave you giddy with wonder. I've stood amongst the lumbering, snowy summits and glaciated peaks of North America, yet these summits, who fall in just a day, never fail to leave one awestruck. We shared the summit, another place marked our passing and etched our memory. We readied the repel...

The brambles in Quebec demand skin in trade for passage. Each taking their meager portion - only a bit, a small sample. But, they are countless hordes. They ate at us piece by piece. Bit by bit through the night. We have a picture of our legs after the race. More blood and scabs then skin. It was the first time - the first adventure race. Crack for junkies like us.

....We sat and surveyed the expanse below and plotted our route. Perhaps a thousand feet below Salt Creek cut into the valley floor and began its relentless destruction; 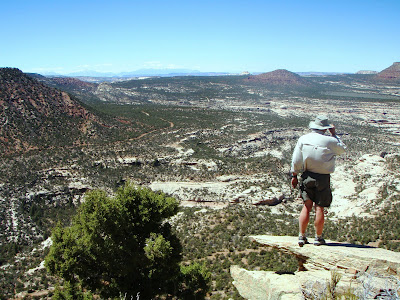 each layer of sandstone giving up begrudgingly and suddenly falling to the next until after twenty-miles a hundred layers lay breached. We plunged off the edge of the mesa hoping to find water but also quench our thirst for a place no one had been. In a little hole in the rock we found water and in the slot canyon we quenched our desire. Cougar tracks gave away the ghost who traveled this place at night. The canyon narrowed and became a slot. It slithered through the pinions, gathered itself together and fell hundreds of feet in one crashing, silent crescendo. We climbed up and around. We spent the remainder of the day clambering through and sandstone and the pinions. In the end we climbed back up the mesa and sat around the fire eating and talking into the night. We went out to see the stars above the mesa; shooting stars celebrated the night and the place. Orion lay deep on the western horizon, lord over the winter no more. The stillness was profound. The immensity fathomless.

I was puking on the road; great heaves and spasms, but nothing was coming out. There was nothing. We had been racing for solidly for over 24-hours over what seemed like weeks and I had eaten almost nothing. I was done, but Tim was in front - pushing, pulling. Each of us came and went - equally spent and equally energetic. When one stood; when one pushed, we both stood. We won that race. 350 miles and seven days. It marked a new point in what we thought was possible - everything.

We bounced up and down Comb Ridge like bunnies spurred on by the Anasazi and the country itself. Two-days of ruins, petroglyphs, and sandstone. 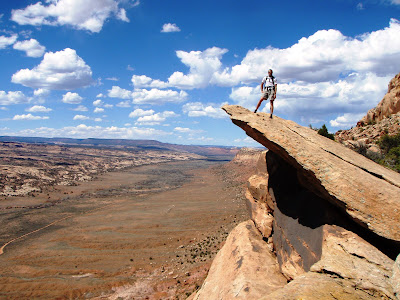 I have written about this place many times and I was happy to let Tim fall under its spell. Our climbing skills were put to good use as we searched the deep washes and climbed the ridge again and again.

To have American antiquity spread before is humbling. We are brothers with the people who called these places home. We felt them. Restless, they discovered everything and filled every corner. The West; these mountains, buttes, and open spaces stirs men who were born in the wrong time. We are better suited to walk with Colter, Powell, Bridger, and Lewis.

Just this week the intrepid explorer, writer, and artist Everett Ruess bones were found on Comb Ridge. Fitting, the mystery of his disappearance was solved this week and his bones were found in this place. He was killed by Utes in 1934 - perhaps the last man killed by Indians. I suspect he would have liked his resting place. It's curious and fitting that William Posey also died about 10-years earlier at Comb Ridge. Perhaps the last Indian killed by whites. Ruess said,

Adventure is for the adventurous.
My face is set.
I go to make my destiny.
May many another youth be by me inspired to leave the snug safety of his rut,
and follow fortune to other lands.
God, how the wild calls to me.
There can be no other life for me but that of the lone wanderer.
It has an irresistible fascination.
The lone trail is the best for me. 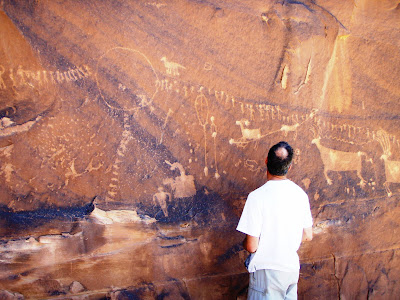 We noted these things and talked of our adventures together, we laughed easily and enjoyed the wind in our faces. We talked about one day being forced, like all men, to leave these places and return from whence we came.

Ruess said much of this far better.

"Music has been in my heart all the time, and poetry in my thoughts. Alone on the open desert, I have made up songs of wild, poignant rejoicing and transcendent melancholy. The world has seemed more beautiful to me than ever before. I have loved the red rocks, the twisted trees, the red sand blowing in the wind, the slow, sunny clouds crossing the sky, the shafts of moonlight on my bed at night. I have seemed to be at one with the world. I have rejoiced to set out, to be going somewhere, and I have felt a still sublimity, looking deep into the coals of my campfires, and seeing far beyond them. I have been happy in my work, and I have exulted in my play. I have really lived."

My dying breath will fire my last thoughts and they will be of the wild places and the people I've shared those places with. There are a handful of people, many places, and there is still time....