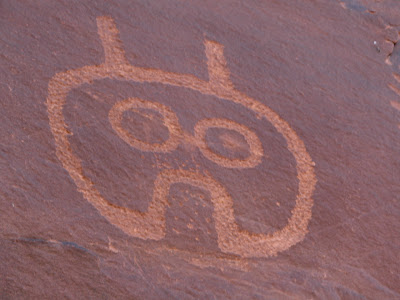 I woke up in the shadow of the ancient ones, their leaves still in the dark early morning air. Orion to the east stood on the back of Comb Ridge. I wondered by what name the Anasazi knew him by. They were gifted astrological observers cleverly noting the sumer and winter solstices and other celestial events. Surely, they awoke and knew how much longer they could slumber by his position in their carefully framed windows. They would have associated him with winter, just as we do. He would have told them their grainaries should be full.

Near here, not 30 meters distance, they lived in a pit house or kiva - cool in summer, warm in winter. The perfect abode for this place. Generations had refined its design, made elegant chimneys, perfected the placement of the firepit, its fireback, and the drafts needed to retain the heat and keep the fire small. I imagined them in this place, in these trees, fetching water; checking beans, corn, and squash, waking up...

I drove south to climb Comb Ridge and return north through Butler Wash, not because I was done with Comb Wash. I have only started. But, before I leave, a little history.

The Hayden Survey (1874-1876) published the first map depicting the geographic, archaeological and geological features of southeastern Utah, including key archaeological sites on “Epson Creek,” now known as Comb Wash. Those of you who read my blog have heard me over and over again comment on camping where the Hayden Survey once camped. I once again crossed their path.

Later, the Mormons would make a little history here. The Mormon Trail intersects with Comb Wash Road and the trail still climbs upward toward Ceder Mesa through something called the twist. A Mormon delegation of settlers established the trail in 1880 and a six-week trip turned into a six-month over-winter trip full of unimaginable hardships. Seeing the country and imagining a wagon train attempting to cross it is a sobering thought indeed. Their full story has a bit of suffering. Here's a short version of the journey.

One other historical event of note happened in Comb Wash. William Posey, chief of a small tribe of Paiutes that roamed southeastern Utah at the turn of the century, was mortally wounded in 1923 by a posse in the Comb Wash area, hid there, and then died. He was apparently a bid of a bad guy, but of course the Indians were treated terribly. Posey was the last "hostile" Indian killed in the United States. His grave is in the canyon somewhere, but it was at least dug up twice just after he died. It is an interesting bit of history. Find it here. 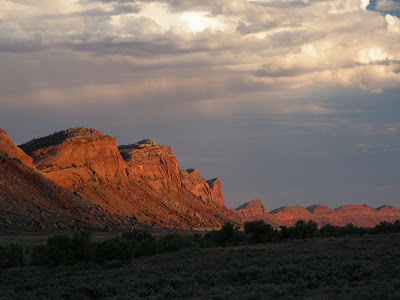 With my coffee, in this stillness, surrounded by the red rocks, the cottonwoods, and the sand all of this history is timeless. Posey still hides in his cave bleeding and dying. Corn, planted in clumps greets the new day, Anasazi turkeys fly down from their night's roost, and the Mormon settlers greet a new day of suffering.

The heat gathered and I loaded up the truck.

Labels: Anasazi, Comb Ridge, get out there, travel, western history