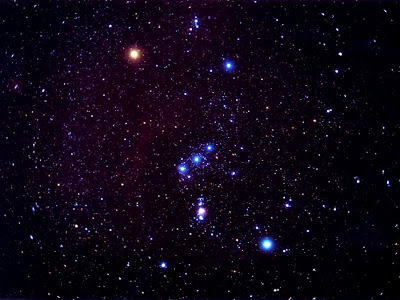 I got up early Saturday morning and saw Orion and felt a deep melancholy darken the night. It was barely visible just coming up over the eastern horizon. The vision of him in the night sky may not mean much to some, but to me the great hunter signals fall and marks yet another year and the change of seasons.

Orion is a winter constellation, missing from the summer sky, but clearly visible when the frost lies deep. As the days become shorter and the cold becomes profound, the earlier it will rise. One of the best known and most recognizable star-patterns in the sky, Orion represents an heroic hunter of Greek myth.


Look for it if you're up early in late sumer. His belt is made of three very large white stars with two famous nebula, the Flame and Horsehead Nebula, located in the belt. In his sword one of the stars is actually the Orion Nebula - a cloud of gas and/or dust in interstellar space, but it is quite visible.

Orion also contains some of the best known stars in the sky, with perhaps the most famous being the variable red giant Betelgeuse, which marks Orion's left shoulder. Betelgeuse shines an amazing 60,000 times brighter than our sun and is about 600 times larger than our sun. You can see its redness with the naked eye. At his right shoulder is another variable star, this time blue in color, known as Bellatrix. At Orion's right foot is yet another famous star, blue like Bellatrix: the supergiant Rigel. These are the bluest and reddest stars in the sky.

Try to spot it - it is quite easy, and after several years you will look to the eastern sky and know time hurries on.