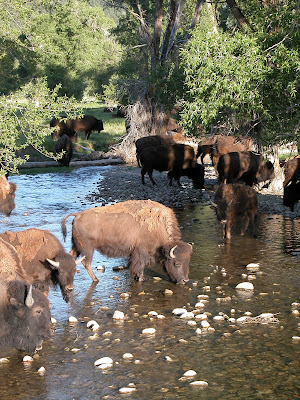 Sadly, all good things must come to an end.

We threw everything in the truck knowing we didn't need order throughout the day or for the next night. We traveled north toward Moose Junction, but before leaving we "said goodbye" to the herd of buffalo located in the Park. Bellowing breathy mist in the cool morning air they gave us an interested nod and bid us a safe trip. It was a fitting end to the trip - I relished seeing them free and unfettered, just as they once roamed. I enjoy them in a hamburger too!

We crossed the Continental Divide knowing it was the last time. I think we crossed it about 10 times, usually at about 7000 feet so it wasn't too eventful, but nevertheless we did get around. The total drive was about 1900 miles.

Headed south down the Chief Washakie Trail along east side of the Winds we quickly reached Lander. Chief Washakie was a close friend of Jim Bridger who, as with most Indians of that era, has a sad story.

Just south of Lander many of the historic trails are quite evident and the BLM has created a bit of a linear park. We stopped several times and crossed the Pony Express route, the Mormon trail, the Oregon trail and various cut-offs and notable formations. 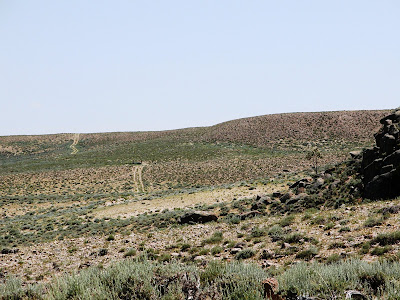 Split rock was among the more interesting. As the land rose toward South Pass and the nights grew colder it was a landmark that could be seen for days as one traveled east to west and deeper into the sage. A pony express station was later located there. In this picture you can see the historic trails heading out over the sage near the location of the station. The Sweetwater is just to the left - a major source of water in the high desert along this section of the route.

I found these sego lilies 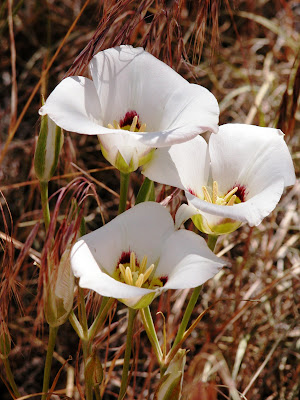 nearby still watered by the blood, and the sweat and the piss, and the tears of those who suffered in this desert and whose bones were bleached white, and now blow around in the dust. Sego is the Shoshone word for "edible bulb".


We drove back to civilization leaving the wild places to those that habit them and the history to those who still look.

(to read about the entire trip select Wyoming Trip from the list on the left and start at the bottom - hope you enjoyed....and tell me your thoughts...)