The New President - An Historical Perspective

Regardless of your politics, ideology, religious beliefs, or affiliation there is a element of this election that reaches beyond simple history. This event is one of those foundational movements in history when things shift. Events like the crossing of the Delaware, the return of Lewis and Clark, Hiroshima, and the Arkansas Nine.

America has always represented an ideal; an egalitarian society; a place of almost limitless possibility. Perhaps the first in the history of civilization and certainly a place that, at least on its face, represents the future of humankind. However, that ideal has been tainted by racism; by the specter that some are not equal. For our lifetimes that fact has been just underneath our collective skin; our promise unfulfilled; our destiny derailed. Photo: Revolution Studios

There is something new. Nothing ends, yet no one had such a bold dream that the pendulum of history could change with one event. 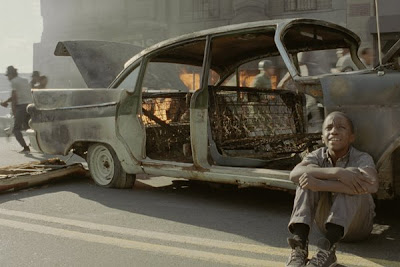 That is why the old men weep. The victory in this election is not Obama's alone, but it is the exhaling of a million held breaths. Perhaps the victory is not Obama's at all. It is our victory. The realization that history will mark this single point as an end to what Truman began is, for many, beyond words. That the silent protest of Rosa Parks, the cries of King, and the sacking of Detroit are not only behind us, but that we did in fact produce a more perfect Union. That we can go froward. That the dreams of all can now be our collective dream.

If possible, there is even something bigger. Beyond these shores, there are children in Kenya and university students in France who look to us, and with joy and hope, wonder if what we have accomplished - they can accomplish. We can only hope.