When I first walked into Lavender Canyon and began to find out who it was named for (and later found differently) I certainly didn't know I would discover that David Lavender and I had a connection of sorts. It's an interesting story.

In One Man's West Lavender has a chapter called High-Altitude Athletics. He spins numerous yarns about our beloved mountains, but one in particular left me thunderstruck. Lavender begins:

There was the time when three of us back-packed into the head of Titcomb gorge in the Wind River Mountains of Wyoming. We left timber line far behind, slogging along a stream milky with the floured rock discharged by the glaciers. The gorge was hung with a necklace of tiny sapphire lakes shimmering in cups of solid rock. Patches of moss were springy underfoot from snow just gone; draft blossoms of forget-me-not, primrose, king's-crown, and gentian, unable to exist in these rigorous climes as single plants formed societies of solid color. Bibs of white circled the peaks. Rank after rank, tier after tier. Thumbs and fingers and fists all pointing skyward. A dazzling world of swift, sharp lines and crystal light.

He goes on to describe the climb and near the end he identified the peak: Twin Peaks; which, because they were the first ascenders, they named. He never said who the other men where, but when I read Twin peaks my memory was taken back to 1991 and I was suddenly sure I had seen his name before and in his own hand.

Ross and I always kept a climbing journal and we've traded possession of the little worn green book a number of times. Currently, he was the keeper. I sent him an email and asked him to call me that night with the book in hand. He did, I read him the story, he let out a yell at the sound of Twin Peaks. He too had remembered. He looked up the day and we had a great time remembering the climb.

In 1991 my buddy and I climbed Gannet in the Wind Rivers walking from Gypsum Creek west of Green River Lakes to do so. We came out in Elkhart Park - a journey of about 60 miles through some pretty rough country; much of it trailless. After we climbed Gannet, we came back down on the west side of the divide and broke camp and headed for Titcomb Basin on the east of the divide via a peak that was almost never climbed - Twins Peak. On it was the original summit register (something I had never seen nor have ever heard of since that time, and I think a rare and interesting document) and the first name on the list was D. Lavender. The date of our climb was 13 August 1991 and the date Lavender listed was 10 August 1930. The three climbers were Lavender, Dudley Smith, and Bucknell. Three days later on 13 August 1930 Lavender climbed the peak again with Forrest Greenfield and Kendrick - the same day we were on the summit, but 61 years later. I recall a note they left calling Twins a"miserable summit". With the exception of a few early climbers around that 1930 date; including Petzolt and Koven (killed on Denali), no one climbed the peak again until late in the 1950's.

Lavender closed out his story of Twins with a story of suffering, but he said this first of that day.

Sitting in such a spot, hugging your knees, you can sense as a tangible thing the hurtling sweep of the earth on its orbit. The very vastness of the pattern stabs you to the heart. But it is not humility. Man would not aspire; he would not be laying his bold chains on every cosmic force he can reach were he only meek. The insignificance some persons profess to feel on seeing a natural wonder which more determined men, given motive, could sail over, tunnel under, or fly around is to me incomprehensible-a hang-over, perhaps, of the oriental fatalism that early tinged our religion. Why not a healthier pride-without arrogance-in being able to muster the courage to see and touch and share the fringes of creation, knowing that if we work well others can share still more?

The photos that day only have Ross on the summit, thus this is Twins looking north-west with my friend on the summit. The next picture is of me, but the previous day having climbed Gannet.(note the wool shirt and wool pants - it really doesn't seem that long ago!) 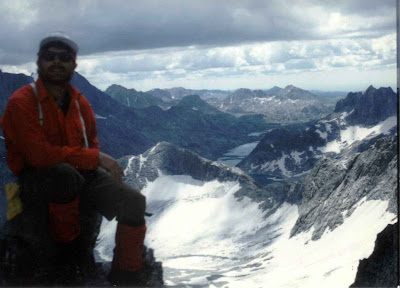 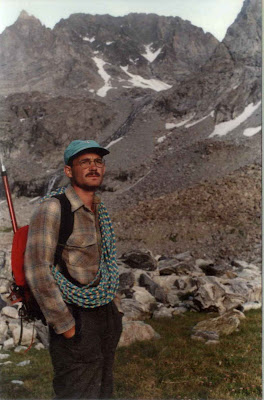