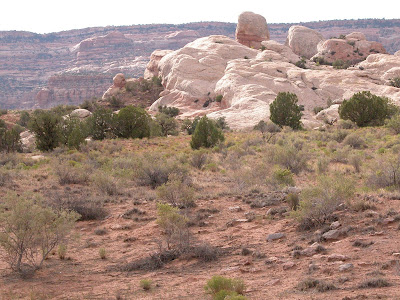 The topo map indicated that there was a ruin up an unnamed wash high up on Ceder Mesa. I only had half-a-day of light having gotten up at 4:00 to begin driving. I thought I could make it to the top. I grabbed my stuff and headed west toward Ceder Mesa. As soon as I hit a high spot I was able to orient the map, make sure I was headed toward the right spot, and haul out the glasses to figure out a way up the steep terrain. There are always ways up the cliffs and across the steep terrain, but if you don't plan it out the most likely outcome is you'll become rim-rocked; this is, stuck and backtracking.

By the way, I took this picture not to show the location of ruin, but in the foreground you will see part of a bowl-shaped depression that was once a pit house or similar structure. While walking I found a single shard, which I though odd, but by making circles found the reason for the "homeless" shard; the depression. I was to find three of these during the trip. I mapped the locations and sent them to Utah archaeologist Winston Hurst. He is a consulting archaeologist who lives and works in his home town of Blanding, Utah. He received a Master of Arts degree in anthropology from Eastern New Mexico University and has been actively engaged in archaeological research in the Colorado Plateau since the early 1970s. He is currently the co-principal investigator for the Comb Ridge Survey Project. The Comb Ridge Survey Project, a multi-year archaeological inventory survey of a 42,000-acre area encompassing Comb Ridge and the adjacent Butler and Comb Washes, is inventorying all the ruins at Comb Ridge to include ancient camps, food gathering and processing stations, storage facilities, settlements, shrines, ancient Puebloan roads, Navajo hogans and historic ranching and mining sites.

On the way up, there were many limestone layers mixed in with the sandstone with deeply red chert inclusions (in geology - a mineral or rock enclosed in a larger body of rock). Pieces large and small were scattered across the desert and no doubt was a large source of stone tools. I found chippings of this chert during the entire trip. I'm quite certain this area must have been well known for this material.

The climb was well worth the effort. 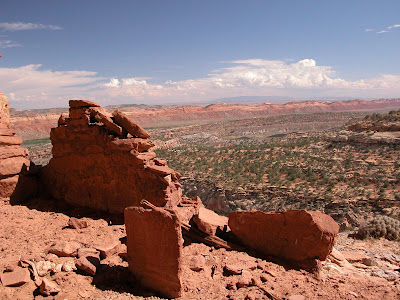 In the picture you can clearly see the deflector stone of the kiva located in the foreground. Comb ridge points south off in the distance. It was a very defensible site with water located in the form of drips several hundred feet up just at the lip of Ceder Mesa. It wasn't an easy site to get to and didn't afford any easy route to go anywhere. Interestingly, the debris pile was cut vertically by water erosion and the layers clearly indicated the site had been abandoned several times and reoccupied. Some of the abandonment layers were more than an inch thick. I don't know what that would equate to in time, but I suspect more than 100 to several hundred years. One of charming things in abundance in most of these ruins, including this one, is the finger prints still clearly visible in the mud walls. Most of the fingers seem to be quite small.

I spent some time sitting and imagining what it might be like to live there. I wanted to climb up and check out the area, but time was ticking and I didn't want to go into the night. I hustled off the mesa and returned to the truck.

I drove down Comb Wash and found a nice place to camp among the cottonwoods. I went out to take pictures of the Comb as the sun was setting and walked back in the deepening dusk. I heard a noise off to my left and peered into the willows, but didn't see anything. As I walked away I stopped to check out the possibility of another picture and something caught my side vision or perhaps there was some small sound. I turned around and WOW, a bear! I truly thought I was seeing something else, but he was only dozen or so feet away. I snapped this picture of what must be the most southern desert bear ever seen, and he was moving south in a hurry. 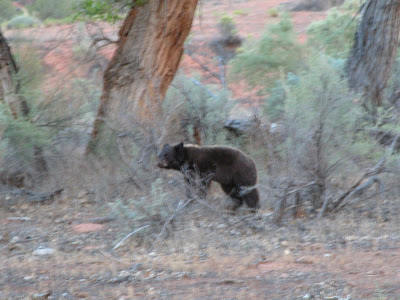 I guess he wasn't in the mood for a fight for he barely gave me a sideways glance.

Labels: Anasazi, Comb Ridge, geology, get out there, travel