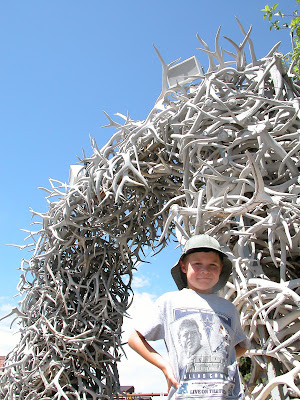 Day three started in the morning shadow of the Winds. We skipped breakfast at camp and headed into Pinedale for some coffee. We found the only internet coffee shop and spent a couple of hours fueling up on caffeine, checked email, and chilled. It was to be mainly a travel day so we drove north toward Jackson, off the "rim", and through the hoback. We wanted to explore Jackson a bit, and act a bit civilized, but we still didn't have a shower. So, we opted for a tour of the art dealers, a few shops, and lunch at a Nepalese outdoor spot. The owner introduced himself and his last name was Sherpa. I ask if he was related to Tenzing Norgay Sherpa and Tenzing was indeed his cousin. He was friends with Jamling Tenzing Norgay, the author of Touching My Father's Soul; Tenzing's son, who climbed Everest in 1996 with a team lead by David Breashears that also included mountaineer Ed Viesturs. (I recommend this book to anyone interested in mountaineering) I met Jamling in 1997 and keep his signed summit picture in my office. Jamling also summited with Peter Hillary, thus repeating the famous duo (through each son) of 1953. Of even more interest is that the owner's Grandfather was the lead Sherpa for Mallory. Mallory famously quipped when asked why climb Everest, "Because it's there" Mallory died on Everest and it was never known if he made it to the top. The successful search for his body and the the events surrounding his 1924 expedition are told in The Lost Explorer - Finding Mallory on Mount Everest ; an even better book. Whether he made it to the summit is subject to debate, but Sir Edmond Hillary said it best, "If you climb a mountain for the first time and die on the descent, is it really a complete first ascent of the mountain? I am rather inclined to think personally that maybe it is quite important, the getting down, and the complete climb of a mountain is reaching the summit and getting safely to the bottom again." 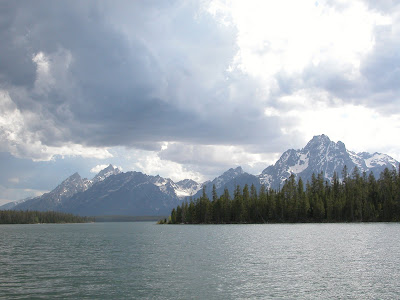 We left Jackson in a hurry to get to Yellowstone. On the way we stopped because Tammi spotted two wolves. We watch them for quite some time while they were playing and goofing around. We later found out that there was indeed a pack in the area. I hadn't planned on it, but we stayed in Colter Bay Campground. (See previous post) We waded in the lake, got hailed on, and saw a really great museum with Indian artifacts. I must say I have never seen its equal - it was quite a surprise.