Since I finished the nightstands our bedroom has improved quite a bit. We added a very modern touch to the whole room by adding brushed metal lamps, modern blown glass, and some modern sculpture (made by Tammi). We pulled off the mix pretty well, but I want to add a table in front of the couch - a coffee table that matches the antiques. But, I want to pull in a modern look too. I thought I would go through the design process a little and this design is fairly simple; that is, it doesn't have working parts, functionality, or other complications.

Off course, the Victorians didn't have coffee tables as such, but I could make a rectangular one with the same wood, construction, and finish. It would look like a coffee table, but match the old furniture. But, I think it might look a bit silly - kind of a fake antique masquerading as a coffee table. The form really doesn't lend itself to just anything you might expect to see. The obvious problem is; where's the "modern" in that? So, I thought about how to make it modern in more than just form - how about a brushed metal top with the remaining looking like the Victorian furniture? I thought about this for a while and thought it might look like a fake antique with a silly metal top. It simply needs something more. 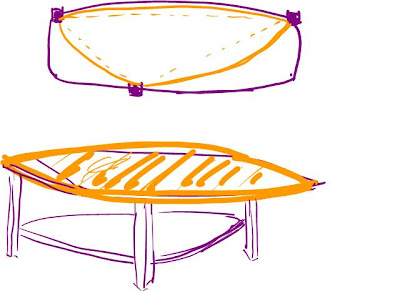 Somehow, I need to suggest the shape and finish of the antiques without creating some goofy mix. While thinking about shape I started looking at pictures of purely modern furniture. This got me thinking about a incorporating some curves that suggest a certain style of modern furniture. One particular thing that bothered me was four legs. Everything has four legs and four legs seemed boring. What if I made the legs exactly the same as the antiques, but lost one and moved the third around close to the middle. This led me to draw this. In plan, the purple is the top and the orange is the shelve underneath. The legs and bottom shelve are of the same material and finish as the antiques. The top, metal, with a shape like the antiques. I thought I was on to something so I got started in CAD and drew and tweaked until I came up the proportions I liked. 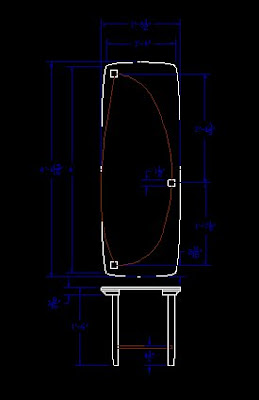 Here is what that looks like. It might be a little hard to see, but if you double click I think you can make it out. The top view is the important one. You can see the bottom juxtaposed with the more traditional shape of the top and the location of the third leg. I intend to use wood under the metal top with exactly the same profiles as the antiques have. Thus, I have the same shape top with the same molding, but it is metal. I have the same exact legs, but there are three. The bottom shelve looks exactly like the tops, but it is a funky shape. Every element of the antiques is present, but no element is exactly the same and offers a bit of a surprise. It will be more like a modern piece that suggests the antiques and might blend the antique/modern look - maybe.


I think it will work, but I'm still not sure. Time for a model so I can see what it might look like. I printed out the CAD plan and used the printed version to scale a model. Out to the shop for a bit to make a quick table - a very little table. 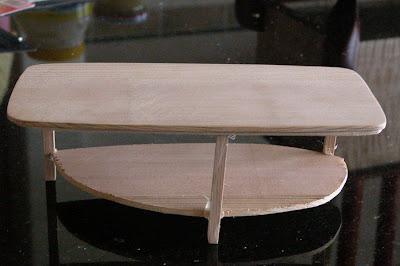 Now I have a bit of something to look at - shop if you will. Here are some pictures of the model. 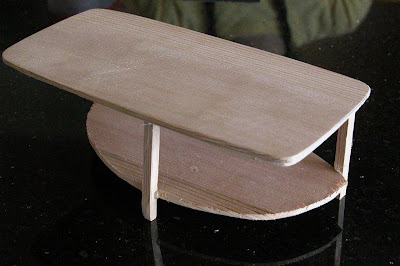 I think I like it, but I could have some problem with tipping as I located the middle leg off-center a bit. Even if it were centered I would most likely have the same problem. It, after all, is a three-legged table.


I decided I needed to do some testing on how much weight it would take to tip the table. When you tip this little scale model with your finger it seems to tip very easily. I took it to work and used the postal scale. The table weighs 1.1 oz. and it took 1.8 and 1.9 ounces placed on either corner (paper clips) to tip the table. A little math and an excel spread sheet produced the following calculations. (the calculation is - assumed weight/1.1 x 1.9 or 1.8) Thus, I can see (if I did things right) that if the table weighed about 40 pounds (I think it will weigh more, but I want to go low) a weight of somewhere between 62 and 72 pounds placed on the corners would make the table tip. That gives me a 20% spread on my calculations. I hope the calculations are right - I'm not known for being a math wiz! I think it unlikely that that much weight would be placed on one corner unless someone decides to sit on it. The most likely person to do that is Bridger, but he will most likely only do it once! As a last resort, if I did this all wrong, I can place some weigh under the bottom shelve located on the side with the two legs.

Now the question is; am I truely convenced the design meets my expectations and when it is finished it will really look good?