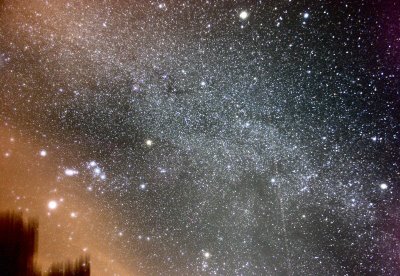 Recently, I was thinking about the Milky Way and remembering some of the places and times I've been mesmerized under its white embrace. There are many, and to me I always have clear memories of when it dazzled me. It never fails to inspire. I suppose that once upon a time most anyone could go out onto the front porch, or perhaps the tepee, maybe the hogan, or the yurt and simply expect it to be there. That, of course, is no longer. It is now special; reserved for memories and places we may wish we were at right now. There are many people who most likely have never seen it - not truly.

The Milky Way is the name we all know best, but it is only part of the name. It is the Milky Way Galaxy - it is where we live. Most readers have seen pictures of galaxies; a round, spiral, flattened disk. These galaxies are spread around the universe and we see most of them a single stars; although, in fact, there are billions and billions of stars in what we perceive as one star. Our galaxy is roughly 150,000 light-years in diameter and contains Earth's solar system. (A light year is 5,878,625,373,184 miles - yes, that's almost 6 trillion miles in one year. By the way, the farthest galaxy is 13 billion light-years away. Do that math!) We are on the outer edge, thus what we know as the Milky Way is really looking inward toward the center of our galaxy and what we see is a white irregular luminous band that encircles the sky defining the plane of the galactic disk. Kind of similar to being a mite on a pancake. Looking up you might be able to see "out of the pancake"; however, looking toward the middle the mite would only see pancake and not the outside world beyond the pancake. The Milky Way system contains hundreds of billions of stars and large amounts of interstellar gas and dust. The Sun lies in one of the Galaxy's spiral arms, about 27,000 light-years from the center.

But, back to the point - it's not science, it's memories. Moab is one of my favorite places. You can disappear in many places and be at least a hundred miles away from the nearest light and the cites are so far and so small and so spread out they don't affect the sky. I always believe I am looking at the same sky as the Fremont and the Anasazi. The Winds offer the same solitude, but higher. Sleeping at 12,000 feet one can hardly separate the stars one from the other. You can even see satellites wiz across the sky. Mt. Robson in the Canadian Rockies is also unforgettable.

There is also a special place in Vermont. The stars aren't quite so bright there, but the place in full of memories, and fun, and the stars are just the icing. Once Tammi and I, when we first met, slept under the stars in western Maryland. The Milky Way shone like new love. I will never forget the view and the feeling.

The milky way makes me think of my friends. Of being high, and cold, and tired. Of fun, of good sleep, and of fires, and climbing, and blankets, and easy talk. It is the stuff of life.