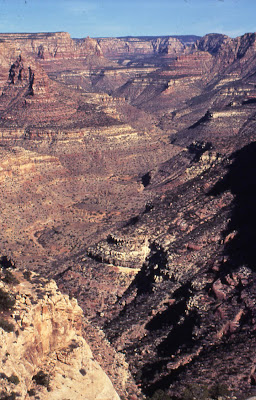 I had been walking in the desert among the mesas and canyons for five days. This was the last day. As I set off my shirt rubbed coarsely against my flesh. The water that cooled me throughout each day drained and pulled the salt from deep within; my shirt, now white and rough, was stained with the previous days' efforts. The Camalback's pack straps were also covered with small, white crystals, but inside was 100 oz of water soon to add to the ghostlike white stiffened fabric. A ring around my wide-brimmed hat told the same story.

Already it was hot.

I stepped into the dry, desiccated sand of Gypsum Creek. The drop was only several inches deep - a mere depression in the sage flat. But, down the slight grade, about 100 yards distance, the Creek made its first drop - almost 100 feet - and became Gypsum Canyon. With it fell the sand and the freshly loosened debris of Beef Basin. Sometimes though it carried the rocks and trees and the remnants of the ghosts who lived here long ago. The water, and that which it has torn away, races down into the depths of the canyon headed directly for the Colorado River some 3 or 4 miles distant; the mouth of Gypsum Canyon opening up its red maw into that great chasm and the river accepting all it will give. Time will ensure that everything here will eventually end up in the Colorado to then be swept further down into Lake Powell; slowly filling the Lake and slowly starving the great cities in California, Nevada and Arizona.

I skirted the south rim and imagined the canyon growing deeper. I could not see the bottom; it was too narrow and the rim held me away from the full view. I took a first sip of water. Each drink is a measured calculation against the day. Will it run out? Will I drink too much? Will the return trip be marred by the focused and frantic drive to quench the emptiness within? The fear of stumbling through the pinions and sage, oblivious to all but desire, controls the craving to extinguish the devil inside and the water he summons, but the battle rages nevertheless.

I followed the track between the pinions beside the south rim, but caught a sound almost lost to the wind. I stopped. I thought I heard the drip of water echoing from the depths. At first I wasn't sure - it seemed not a drip, nor a stream. The wind slowed and the sound collected and rose. The thought of coolness reached up and engulfed my entire being. I imagined a refreshing, deep pool. I vowed to return at the end of the day and plunge into the darkness of the canyon baptizing myself in the bliss and washing away the sins of the week. Forged by the wind and baked hard by the sun that thought remained throughout the day .

Fable Canyon joins Gypsum Canyon, but the larger of the two is Fable. I wanted to peer into its depths so I understood how to best traverse it on a future trip. As I walked west the views opened to include the entire valley system. Rugged, deep, steep and massive the cliffs tumble red and wonderful until the entire landscape seems to scream for you to turn back, yet beckons with a whisper for you to try. I clamored out, now out of the shelter of the cliffs and hills, to a point where the two canyons meet; the wind tearing at this interloping salty apparition, snapping at itself until at thought I would be picked clean of the sandstone and hurled into the abyss. Only the hot wind of the desert seems to have evil purpose. The cold winds of the high summits seem benign as they pull and push on your crampons, but these rushing desert winds tear at you with furious purpose.

Seven-hundred foot straight down was the bottom swept clean of even color. The rushing water had left nothing. I returned and followed the meandering rim of Fable south until I could see its beginnings. Next time I'll descend into Fable and follow it to the Colorado. It would however, not be easy.

With the thought of the water I retraced my steps. Turning east the wind abated and the stillness and heat descended and suffered nothing. I found a cool, low alcove and crawled in and lay in the dirt; the dust mingling with the salt, the smell, and the sweat. I rested and ate a little nodding off a bit thinking about the promise and the sound of water...

I returned to the place I heard the water like a salmon to the place it was born. I was drawn there, I did not have to know the way. The sound remained. I walked the rim looking for a weakness and found it at a small bend in the canyon. I descended the cliff bands finding a weakness in each, sometimes hanging and dropping and sometimes climbing down or jumping from block to block.

The solid limestone bottom held no stream, no coolness, no respite. It was swept clean; the water sculpting and cutting the rock into that which it desired - that which fed its inexorable journey toward the Colorado. I walked down the canyon till it was joined by side canyon equal in size to itself. The canyon narrowed into what I could not see into earlier in the day. I could hear falling water. The limestone became smooth, the canyon walls polished, water appeared.

The limestone was flat and about forty-feet wide and the water meandered across the bottom, but it was just a trickle flowing here and there sometimes breaking up and sometimes coming together. It formed small pools no more than an inch or so deep. I could see that the canyon dropped and I walked toward the sound of the water, the heat eating my flesh and baking my bones white and hot to the touch.

The red canyon walls straightened and the desert blue sky narrowed. In a crescent moon shape the limestone floor abruptly fell away to a glistening pool about 25 below. The clear water beckoned. The small trickle fell into the pool in more than a dozen spots creating the sound that tantalized me far above. The falls were undercut; the softer sandstone having eroded far under the harder limestone. I looked around for a way down - I found none. The smooth walls held no holds. Being a climber, I can get up and down most anything, especially a small vertical distances with many choices. I prodded and hung and plotted. The problem was not getting down, but getting back up. I could jump, but I couldn't even imagine a line to get up again. I could see that the canyon continued to plunge so I couldn't bank on an escape further down. Likely, there were more drops.

I sat on the edge, a mad man longing for that just out of grasp. The wind was gone. The heat between the walls collected; oppressive, unrelenting, unforgiving.

Not ready to give up; compelled by thought of the pool and a natural shower, I went back up the canyon thinking I might find a suitable tree to drag down and tip over the edge. Hydrus had swept his palace clean - they had all been swept away. Seemingly I could not commute my sentence. My sins would remain. But...looking down again past the falls I could see a large tree trunk striped clean of all branches. I thought I could move it; I thought it would work. I hung over the side and let go.

Labels: geology, get out there, travel