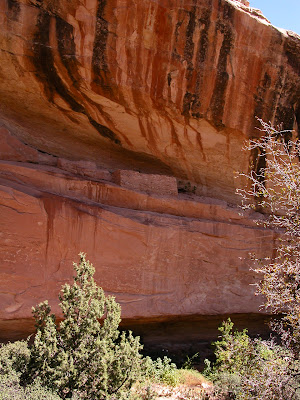 Butler Wash parallels Comb Wash like two wild-eyed stallions bent on some distant finish line; neither fast enough to pass the other. Nostrils flared, both rush toward the San Juan River to the south. They are about a half-mile apart, but a world away - Comb Ridge separates them.

Butler Wash seems hotter and dryer. There is less vegetation - not that Comb Wash is any jungle. It bares the heat of the sun for the entire day whereas Comb Wash luxuriates in the long cool morning shadow of Comb Ridge and the long evening shadow of Ceder Mesa. Even the pinions avoid the lower half. Closely to the east lies Black Mesa whose cliffs rise above the sage, but not too far - usually about 100 to 200 feet. To the west, white bare sandstone rises almost directly out of the wash creating an almost unbroken 20 degree plane rising toward the setting sun and Ceder Mesa. Upon reaching the top of the unbroken slickrock Comb Wash lies about 800 feet below. This snake-like summit is broken along its entire length by deep washes carved out of the solid sandstone. It is in these deep, narrow canyons that the Anasazi made their cliff dwellings. (In the picture below, taken within one of the deep washes, you can see Black Mesa to the east) 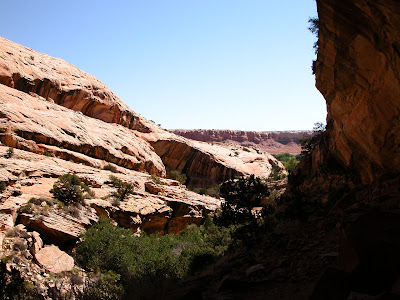 Along the wash, at various times, they lived in the pit houses I have described; they planted and harvested corn, beans, and squash; and they roamed the area for the many other food items they collected. They were the masters of the land.

I approached this wash a little differently. The road roughly followed the wash north and I stopped often doing one or two-hour walks up into the Comb. Although this side was drier there seemed to be more habitation. At each stop I headed into one of the deep washes. Each held their own secret. The angled sandstone was white-hot in the noon sun; almost unbearable, but the washes were cool. I waited till evening to climb the ridge. 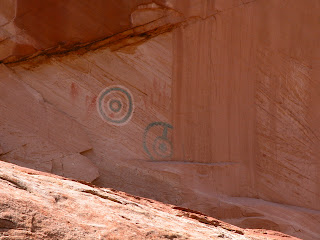 There was some water in the the deeply cut washes, but not too much. And, Butler Wash only ran during rains and drained a limited area. But, when it did rain there was as much solid rock as soil and the wash must become a torrent. All day I looked for the water and all day I wondered.

I camped early, tired from the three days and somewhat beaten by the heat. I went up one more canyon and came back sitting in the only shade around - a grove of stunted and hardy oak trees. I wasn't the only one to find this place. The ruins of a Navajo hogan from the 1950's was nearby and just beyond that the telltale concave depression of a pit house. A Pinyon Jay kept me company while I rested and ate.

I picked up and headed up the comb. Where the sandstone met the soil I found a depression containing maybe 20 or 30 gallons of water. I bent and drank deeply and tasted the earth. I wound my way up the rough sandstone, skirting the drops and climbing now and again. Soon I found my answer. There were solid sandstone depressions containing pools of water everywhere. Some were crystal clear, some turbid, some even contained tadpoles. This barren, solid rock is where the water was stored in the cleanest vessel nature could find. In a space of a few acres there were 50 or so. In Spanish these water pockets are called tinajas and to desert travelers they are almost holy. I stood on earth's spine looking north and south and the view of white sandstone seemed unending. Black clouds gathered and I headed down. 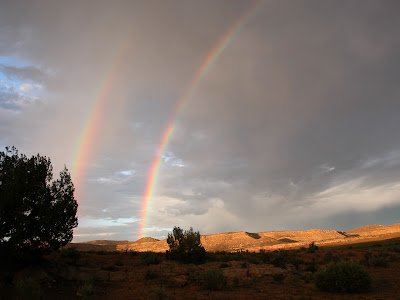 Every evening, after the clouds build, the thunder roles across the desert. Far off darkness tells of rain and water. Lighting flashes far off into the night. Every night I watched this show usher out the sun. This evening I received just a few drops with the now answered water question quenched. The thunder crashed, a lone cicada serenaded the coming darkness, the crickets came out into the coolness, and far off two coyotes called to each other for the night hunt to begin.

The clouds fled with the darkness and I watched the stars come out. Again, I had found a lifetime in a few short days. I will return and find these places and feed upon stillness, glory in the beauty, and wrap my soul in the spirit of the people who called this home. 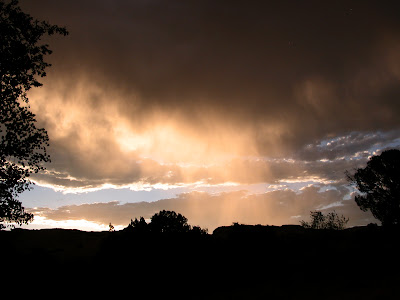