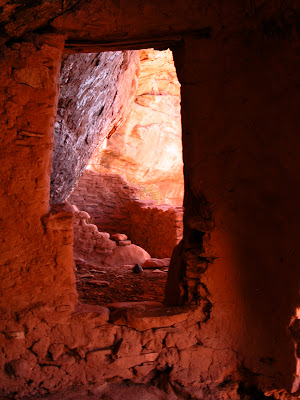 The name Fish Creek implies water and indeed the creek does have water, but it does not flow in the traditional sense. However, there is enough water that most of the pools aren't stagnant, but are refreshed by seep and infrequent rains from the the creek's large drainage lying west toward Ceder Mesa. The water courses down through miles of sand and bedrock, collects, and feeds life for miles around. I saw raptors come to drink here in the evening and the prints of deer and coyote coming and going. In the wash I also saw bear scat - perhaps he was not an infrequent visitor. The accumulated pools are numerous and shallow, collecting in some areas, but absent in most others. And no, I didn't see any fish.

There is one other element to the water in the canyon. It brings life, but sometimes it kills. The evidence is written in the narrows; high water marks more than eight foot high, twisted piles of debris, massive rocks heaved against broken piles of chaos. As it rises, fed by the many, many square miles of exposed sandstone the torrent seeks nothing, but destroys everything in its path; especially, if that path is narrowed or restricted.

The canyon is dotted with ruins and seems to contain many eras of settlements. Only general inferences can be drawn without the archeologist's work, but there are clearly many kinds of structures and styles. Where the canyon joins Comb Wash there is a pit house; considered one of the earliest structures. There are many types of cliff dwellings, some clearly not intended for any kind of defense whatsoever. The two-hundred-fifty-year period subsequent to A.D. 900 is known as Pueblo II and seems the best fit for many of these ruins. But, there was one that was so clearly intended for defense or warfare I have never seen its equal. High on the mesa, up on a mushroom rock, unapproachable, and unreachable to me was a ruin. I have included it a picture of it here. It took a tremendous amount of work to get the material in place. It is a very defensible position, but I question its utility as you could be penned there with no escape. It is quite a sight, high up on the mesa silhouetted against the cloudless sky. I wasn't even sure it was a ruin at first - it seemed too improbable. If it was built for defense it is hard to imagine the fear the inhabitants lived in. Was it for the woman and children? Whatever the reason, this wash was last inhabited about 1250. 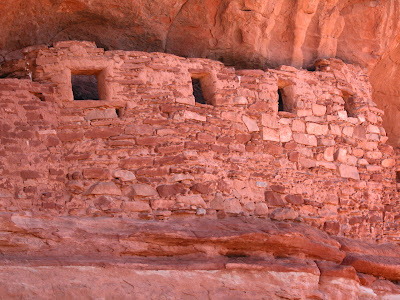 Some of the masonry is rather rough and some structures are built very skillfully. Generations lived here - the span is almost unbelievable; about 2000 years. It may have been sporadic and discontinuous, but not so much as we might imagine with our rather insignificant 250-year history. In one ruin a large flat rock used to grind grain (matate) worn with years and years of use was recycled; raised on its side and incorporated as part of a new structure.

It was a good day and an interesting place to visit. Even more interesting because there is nothing fantastic, nothing to bring the masses. It is the ordinary, the everyday - a place where 1000 years seem near history, uncelebrated, unphotographed - quiet and unassuming. That is the true magic of the place. 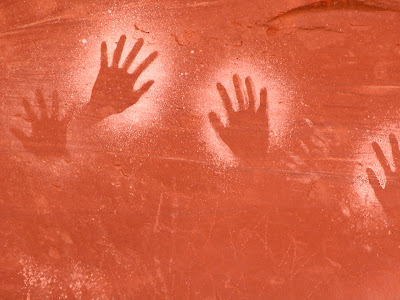 And the hand prints outlined on the walls, their souls long departed, still mark the place with their work and the stones they set. We could only hope to leave a mark 1000 years later so those who passed wondered at the sight.

Labels: Anasazi, Comb Ridge, get out there, travel, western history