The Flower or the Bee

There are some things thrust upon us, some we bring on ourselves, and some things tip us spinning and careening into chaos. We view them as bad, we view them as good; and yet, we do not know the end. Perhaps we should not be so quick to judge.

A farmer named Sei Weng owned a beautiful mare which was praised far and wide. One day this beautiful horse disappeared. The people of his village offered sympathy to Sei Weng for his great misfortune. Sei Weng said simply, "Who can say what is good or bad?" 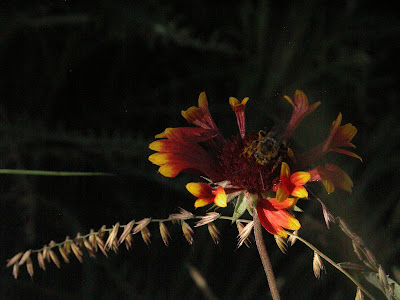 A few days later the lost mare returned, followed by a beautiful wild stallion. The village congratulated Sei Weng for his good fortune. He said, "Who can say what is good or bad?"

Some time later, Sei Weng's only son, while breaking in the stallion, fell off and broke his leg. The village people once again expressed their sympathy at Sei Weng's misfortune. Sei Weng again said, "Who can say what is good or bad?"

Soon thereafter, war broke out and all the young men of the village except Sei Weng's lame son were drafted and were killed in battle. The village people were amazed as Sei Weng's good luck. His son was the only young man left alive in the village. But Sei Weng kept his same attitude: despite all the turmoil, gains and losses, he gave the same reply, "Who can say what is good or bad?"