Sadly, vacation was coming to a close, but we still had one good day in us. We wanted to get as far up into the Tetons as possible and a friend had recommended Death Canyon. Friend - Death Canyon? Well, there wasn't any death and the canyon was quite beautiful. 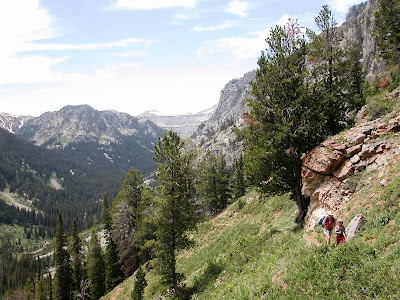 Thus far, Bridger had some fairly big walking days - into the 12 to 14 mile range, but this hike climbed steeply out of the plain defined by the Snake and into the teeth of some very rugged mountains. We weren't sure how far we would go.

We started out as early as possible vastly aided by the fact that we didn't have to pick up camp again. This was only the second time we stayed in one place for two nights. It was a short dive to the trailhead located at about 6,800 feet. Death Canyon is a classically carved, U-shaped, glacial valley ending in a lake (Phelps Lake) with a large lateral moraine on one side, most likely last formed during the Pinedale Glaciation. 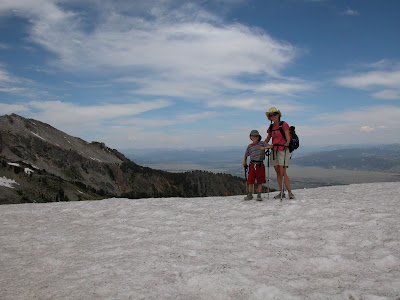 The moraine on the side of Phelps Lake must be descended on the way in and climbed up on the way out - an elevation of about 440 feet. A moose - deep in the brush and eating furiously, greeted us at the bottom of our descent. The trail was steep and rough ascending beside the newly melted snow crashing down the narrow valley. Spruce and fir grew scattered about mostly growing between exposed granite and the steeply sided meadows of low-growing shrubs and flowers. We were fortunate to see a female blue grouse with about 10 tiny chicks at close distance. Now, we had seen the entire of the family.


Eventually we reached a step in the upper valley; Alaska Basin, the stream slowed to a quick walk and the firs grew large. 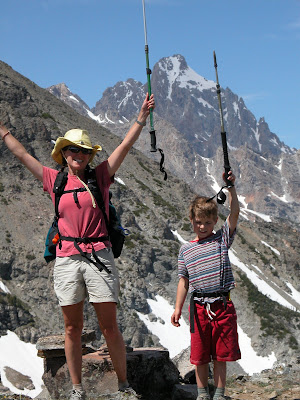 There we decided to go directly up the mountain to the pass high above. It was another 6 miles to the top of this valley on the existing trail and a 25 mile day might be too much for Bridger. This way, we could get him up high without so much walking, but it would be very steep walking.


The trial switch-backed up of the side of the north slope of the valley. We climbed for about 2 hours before reaching a small, lower saddle and then decided to try to reach a lesser peak located further up the trail. An easy climb lead to a snow covered saddle with the peak a short climb up a steep slope. A scramble up lead to Bridger's first summit -10,552. We returned - Bridger did about 17 miles with a climb of just about a mile.


Someday, perhaps we can take him up to the summit behind him in the photo - The Grand Teton.