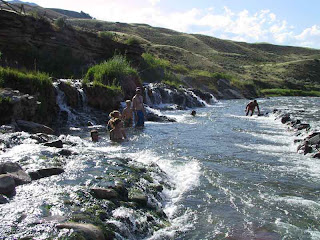 The first thing we did is head down to the Boiling River swimming hole for a dip; much of the intent being to get clean again, even if only for a little while. Wow, what a great swimming hole! A large boiling creek flows out next to the Yellowstone River then runs down into the cold water at various places along the bank. The boiling water is too hot to stand, but mixed with the cold water the overall experience is not unlike going from a sauna to snow and back again - it is awesome. We must have "swam" for an hour. Don't miss this if you're near North Yellowstone. 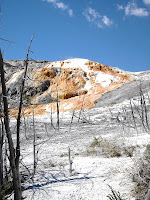 A quick breakfast and a walk around Mammoth Hot Springs finished out this area of Yellowstone. The main attraction at Mammoth Hot Springs is the terraces; however, we waited to see them until last. Heat, water, limestone, and rock fracture combine to create the terraces. Travertine is deposited as white rock, however the microorganisms and living bacteria create beautiful shades of oranges, pinks, yellows, greens, and browns. The Mammoth Hot springs are constantly changing. As formations grow, water is forced to flow in different directions creating a vast complex of tiers varying from white to dull gray. The Terraces, first described by the 1871 Hayden Survey (the same survey to stay at Steamboat Mountain - see day one), were given the name of White Mountain Hot Spring, even though they were well known and named before then. Obviously, the name didn't stick. The pictures aren't too great, but the overall effect and size of the terraces is really quite a sight. They cover a massive area just above town. By far, they are the largest in terms of size, in Yellowstone. 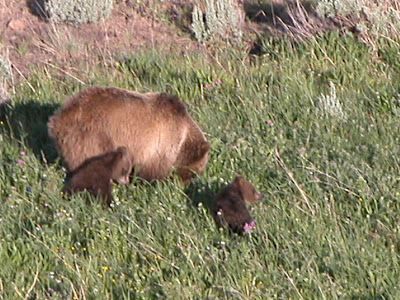 Once again, it was a race to see everything, yet still get a campsite. North Yellowstone is a bit more mountainous with large, open parks and less burned areas and few geothermal features. It actually reminded me of the Winds River Mountains a bit. On one pull off we saw a large petrified tree which was still standing, the usual bison, great flowers, and, finally, the big kahuna - a grizzly. But, this wasn't just a plain grizzly, this was a mother with two cubs. She was sleeping and the cubs were somewhat sluggish, but it was great to see. We would come back to the same meadow later in the afternoon for the big show, but for now on to the Grand Canyon of the Yellowstone to get a camp site and see the area. We did get a camp site although the sign said the campground was full. Yellowstone Falls was close. 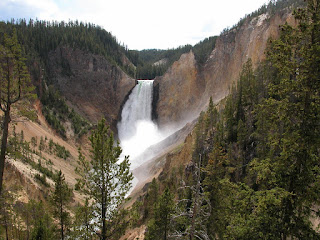 The Canyon is simply amazing and very unique. I haven't seen anything quite like it. We drove around and saw it from every vantage point and took every trail up and down. The pictures tell half the story, but it is one of those sites that must be experienced in person. There are actually two falls in the canyon: the upper falls falls just over 100 feet, but the lower falls over 300. It is beleived that Jim Bridger was the first to see the falls in 1846. 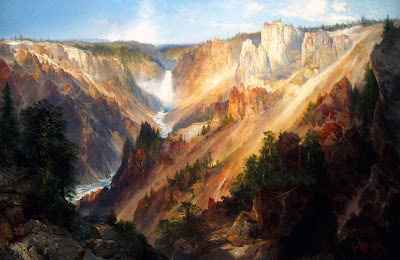 The falls were named in 1869, and in 1871 the Hayden Party explored, photographed, and painted the falls. Moran was the artist and the painting of the falls and the Grand Canyon of the Yellowstone is perhaps his most famous painting as it was shown to congress and helped establish the Park. The painting is quite faithful to the real thing - color being the most surprising. The reds and yellows are truly spectacular.

After we exhausted every vista in the area Tammi suggested we go see if the grizzly was still there. We did, and she was. What a treat. We watched her and the cubs for about two hours - nursing, playing, fighting, and goofing around while mother dug for roots. We spent most of the time next to a biologist who knew everything about bears. His wife did detailed studies on the elk populations and the effect the wolves were having. The grizzlies have been aided by wolf kills too as they are mostly scavengers. He pointed out where the bears winter, what they eat, how far they ranged, how old the cubs were, and a million other interesting things. How often do you get to watch grizzlies and cubs while having a personnel guide? It was like a nature program, but you were there. We were, by the way, very close. I could have hit them with a well thrown rock - that's close! 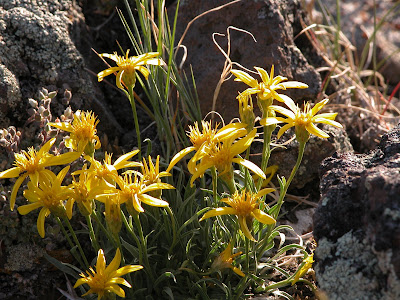 We finally left and headed back camp. Another terrific day - the Boiling River, Mammoth Hot Springs, grizzlies, and The Grand Canyon of the Yellowstone.