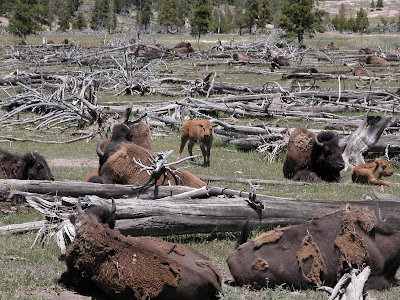 Well, after six days we're still showerless and heading into town! I'm sure the locals will love us. We got up early to drive to West Yellowstone (outside the park) to meet Astrid. On the way we saw a eagle sitting beside the Madison River. She had a nest nearby which looked like it had one chick which was rather large. The western part of Yellowstone is a bit drier and it begins to level out with the Madison flowing directly west. It however, doesn't flow into the Pacific. It is part of the headwaters of the Missouri which defines almost all of Montana and is the central and primary river basin.

We arrived early in West Yellowstone and called Astrid. We hadn't had any service most of the vacation and it was the first call. Well, long story short, Astrid was still in Missoula and will forever be known as squirrel girl. We were very sad not to see her. We did the most important thing first and found a coffee shop. Then saw a bit of the town, ate breakfast, had enough of civilization, and headed back to Yellowstone. We had found out through a friend about a swimming hole in the Firehole River and we headed for that. We knew it would be cold, but we stank enough for it not to matter. It was cold, but it was invigorating. I convinced Tammi to swim and of course Bridger was all over it. We were clean!

We changed and headed back toward Old Faithful stopping at Fountain Flats - a basin off maybe 1200 acres. (a calculation on satellite photos came up with the entire basin being 1543 acres) We decided on a hike around the area and headed out. Crossing the Fire Hole River by bridge we came across a huge buffalo herd which I believed to be about 500, perhaps as many as 1000 - it was hard to tell. The meadow itself stretched more than five miles long and a couple of miles wide and was surround by high volcanic cliffs on three sides. The buffalo herd surrounded the trail and covered the meadow. Most of the herd were napping and we actually walked through the mist of the seething mass. There were other people on the trail (actually an old road) and the beasts seemed quite ambivalent about our presence, but it was the heat of the day and the big boys were mostly bedded down - none were closer than about 20 yards. A few might have been closer, but we quickly passed. What an amazing thing to be in the center of a massive herd of bison. We were charmed and somewhat terrorized at the same time. I wish I could accurately describe it. Little did we know it would get plumb scary later.

We continued to walk and soon passed Goose Lake. At the far end an eagle sat on a dead tree having just finished a fish. We stopped and watched a while, 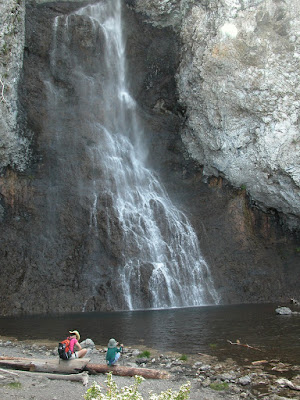 but he refused to do anything exciting beside look regal so we moved on. We wanted to see Fairy Falls and headed in that direction. I hate to say it, but if you've seen Niagara Falls and Yosemite Falls everything else is somewhat anticlimactic. There were some hot springs noted on the map so I wanted to head that direction. There was no trail so off we went. Wow, what a treat. We found a very active geyser (Imperial Geyser) which went off every 45 seconds for about 20 or 30 seconds. It was very voluminous, tremendously loud - simply stunning. A deep, boiling pool of blue surrounded the geyser with several mud pots scattered around the perimeter. The frequency of the eruptions keep us there for quite some time and the best part - no walkways!

There was another nearby geyser (Spray Geyser) which was quite small, but boiled up in a constant osculating eruption. We decided not to return via the trail, but to follow the large meadow around on the south side. We came across the remains of two buffalo and one elk very graphically illustrating the importance of the bison in the food chain. It is hard to believe, but the wolves are able to take down the huge beasts, thus providing food for bears and lesser scavengers. The kills were old and we could not determine how the animals may have died, but the bones were stripped clean and white. 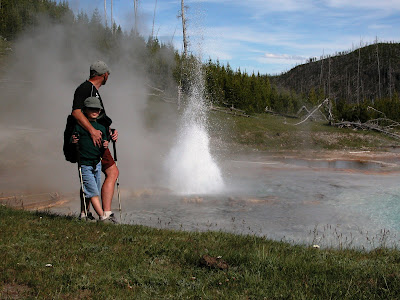 I have often heard the claim that bison are easier on the land than cows; therefore, it was very interesting to see the meadow as used by the bison. The herd seems somewhat pinned by the surrounding area and I suspect they seldom move, but I don't know this. Having grown up playing in the same fields with cows I am intimately familiar with what the fields "look like", and I found little difference between the two. The bison's hoof is somewhat smaller, but that also means they exert more weight in a smaller area. Some bison pies appear exactly as do cows, but some are much more consolidated, thus not killing the vegetation they cover. I suppose I would call it about half-and -half. As for grazing, it is about the same. The bison wander slowly forward, just as cows, leaving behind a similarly grazed area. The appearance, overall health, and general state of the meadow seemed to me, about the same. Of course, this isn't scientific, but I expect most of the claims are visual also and result more from an agenda than from fact.

Thus far, we had covered about 10 miles with about 2 miles back to the truck. It was getting on toward evening, the heat was abating, and we could see across the meadow that the herd was on the move and we aimed to miss them. I didn't want to be stuck in open meadow with something more than 10 times larger than me on our tails. The problem was we had to cross the bridge Firehole River so we were somewhat roped into a specific area. The bulk of the herd was located mostly toward the south and heading somewhat north. Being on the south of the meadow we crossed about a half-mile directly across the meadow so we could skirt them on the north and reach the bridge. There were a few trees there too and it seemed a bit safer. Once we got to where we needed to be the leading edge of the herd was pushing us away from the bridge. It was all we could do to make some progress in the right direction and still keep some reasonable space. And, wouldn't you know right in the middle of the chaos we ran across the most awesome bird I have ever seen - a pterodactyl. 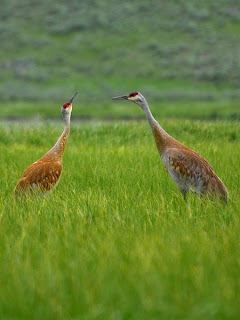 Well, it wasn't really, but it was huge - taller than Bridger, taller than the bison! It was a pair of sand hill cranes with two chicks. These birds have a wing span of almost 8 feet and they were giving the herd heck for being too close to the chicks. We so wanted to stop and take pictures, but the bison were moving fast, the cranes were stirring up the lead animals, and we were booking across the grass.

We found a break in herd and hightailed it for the bridge only to find ourselves surrounded and cut off with no way out but to make for the bridge through the herd. I, to this point, hadn't been too uncomfortable with the distance, but there were about 20 or so bison spread out nearby, of which about half-a-dozen were close to the trail. I grabbed Bridger's hand and foreword we went! I could have hawked a good loogie on any one of those six. One gave us the evil eye and a low grunt. That is, without a doubt, as close as I ever want to get to a volkswagon with legs and sharp horns.

We drove back to camp, ate dinner, and went to bed. It was a great day - perhaps the best so far. 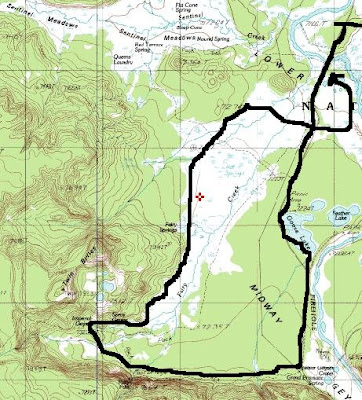