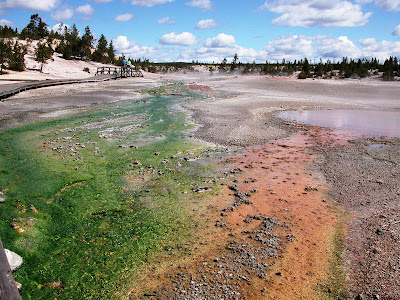 One of the great things about camping is moving on everyday, but one of the bad is packing all the junk everyday. Today, no packing - we stay here for three days! So, up and out early heading north toward Manmoth. We didn't really have a day planed per say, but we did have some ideas. We weren't sure what we would find along the road - that usually, as we have found, fills up quite a bit of the day.

As always, and as we expected, there were the usual selection of hot springs, geysers, and thermal whatnots to explore, but we wanted something a bit more interesting and hands on. I saw some indications of some off-trail hot springs on the map and we wanted a bit of a hike so we headed to the Solfatera trail. We filled up on water and some food and strapped on the most important Yellowstone trail item - pepper spray. But, this isn't your grandma's pepper spray (that is, if she's a runner or habits biker bars). This is like a small fire extinguisher, shoots 30 feet and lasts seven seconds. It's industrial. This would put your average mugger into the ICU - it's made for bears; angry bears; big, angry grizzly bears with an attitude. If you have the presence of mind to use it, and use it right, it works quite well. I have a secret desire to use it, but only if everything is perfect; i.e. I see the bear coming, there isn't any wind, the bear has just eaten and simply can't hold another bite.

We walked about a half-a-mile and had our first "encounter". We came around the corner and smack in the middle of the trail was (no, not a bear) a very large bison of unusual size giving us the evil eye. You simply can't appreciate the size of a buffalo until you look them square in the eye with nothing between you and the tip of their horn. In takes very little imagination to 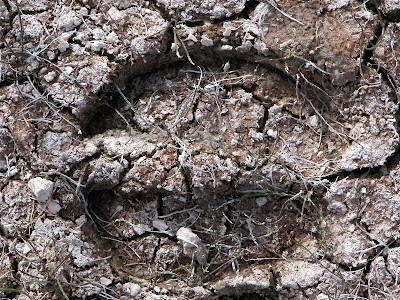 imagine just where they might put it should they desire. We beat a healthy retreat, give the beast some space, and took some higher ground. We noticed that many of the big males tend to hang out, alone, away from the heard in these lush meadows.

Buffalo weigh about 2000 pounds, run about 30 MPH, and don't like strangers very much. It is estimated that in the mid-19th century there were up to 100 million wondering about. Everyone knows their sad story. Seeing them, wild, unfenced, and natural, was for me, the highlight of the trip. It took me back closer to the time of Bridger, Colter, and the mountain man. It made imagining unnecessary and actually put it to shame. Their massive bulk, the smell rising up, the sound of their breath and the depth of their groans put you squarely in the realm of the wild.

We walked a bit and smelled sulfur and soon the springs came into view. There was one other car at the trail head and we found three people it belonged to. They had gear spread out and it turns out a molecular biologist was collecting samples of the thermophiles in the boiling water.

It was fantastic to be able to walk around freely. All of the areas we visited thus far had wooden sidewalks and signs which keep the thermal areas pristine due to the volume of people visiting. The approach has worked well and the geysers and thermals were, it seemed, just as they would be if no one saw them, but this area didn't have visitors in any volume.

Prior to 1967 it was thought the highest temperature where photosynthesis was deemed likely and bacteria could exist was thought to be about 160 degrees F. At temperatures higher than this, it was a known fact that enzymes were destroyed. Boiling was considered a sure way to kill bacteria.

Imagine the surprise of researcher Dr. Thomas Brock when he discovered in 1967 a bacterium that lived at 176 degrees F in the Mushroom Pool of Yellowstone National Park. Dr. Brock's discovery opened up a new era in biology, which has resulted in the recognition of a third kingdom of life, Archea.This discovery also began the search for other organisms that might exist outside of our previously recognized limits, both on Earth and on other planets. Our understanding of the ability of life to prosper in a variety of environments has been vastly expanded, while our definition of "hostile environment" is shrinking. We now realize that there are organisms that "eat" sulfur, live kilometers beneath the surface in rocks, or even live near high-pressure, high-temperature, deep-sea volcanic vents. The possibilities for life now seem without bound. It all started in Yellowstone and these researchers were continuing the work. These extreme life forms color the water all kinds of crazy colors. Sometimes, where two different temperature streams meet one half will be green and the other half yellow until the temperatures combine to make a third color. 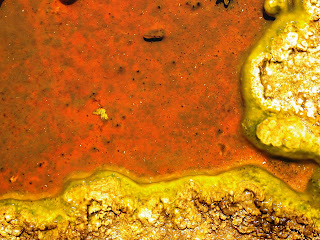 Dr. Brock placed a sample of the first bacterium that he discovered, Thermus aquaticus, in the American Type Culture Collection, where it became available to anyone wishing to study it. Later, in the 80s, a scientist working for Cetus Corporation used a sample of this species to develop a process that uses the high temperature stability of the enzymes in this heat-loving organism to perform polymerization of DNA in large quantities. This highly successful process is invaluable to modern medicine. Revenues from the patenting of this process have topped $500 million a year, but the tragedy is that none of this money has been funneled back to Yellowstone National Park.

In 1997, Diversa Corporation entered into a five-year agreement with the Park to collect samples of thermophilic organisms for a stated sum of money and a royalty on any patents issued as a result of their research. 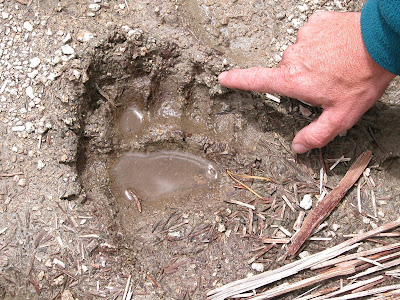 The organisms themselves were to remain part of the public domain but now the Park System would be able to benefit from the "intellectual property" obtained from research on these organisms. While cooperative research and development of a public resource was considered a controversial move, the agreement held up to legal challenges. As of April 2000, the Park is able to benefit financially from research on this bio-resource.

As we walked into the area devoid of vegetation (due to high ground temperature), Eagle-Eyed-Tammi spotted a large bear print. Because of the size, we thought grizzly. If you look closely you can see the bear had a cub whose print appears sideways in its mother's print. We spent about two or three hours carefully exploring the area. It's really amazing to bend down and feel the heat of the earth. The ground is so hot sitting lasts about 10 seconds and the steam vents burns instantly. The boiling water is, well boiling. We saw mud pots and little geysers, boiling streams, and all manner of thermal activity on a small scale. The small scale made it very accessible and close - it was unparalleled. The yellow crystals are what the inside of a steam vent looks like. 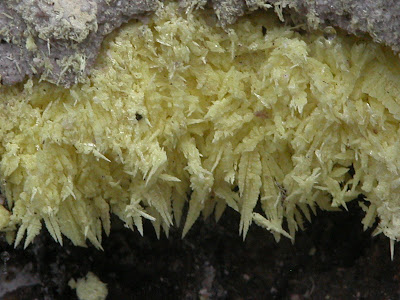 We hiked back to a small lake, circled around and headed back to the car. That had taken most of the day so we headed back to camp. We wanted an early start the next day as we were going to drive out of the park to meet a friend; Astrid, who was coming from Missoula down to meet us.