I sorted through the lumber, picked and labeled the wood I wanted to use. I had six, 17" wide boards that were cut in sequence. Thus, I could book-match the pieces and create a very nice top. I shuffled the boards around until I had the grain I wanted.

Once the pieces were joined and planned, this is what the stack looked like. These stacks will be the desk and a small bookshelve.

As you'll see in the next picture the boards for the top  and bottom are very large and nicely figured. I can have a very wide desk with one wood joint and that joint will look natural because of the book-matching. 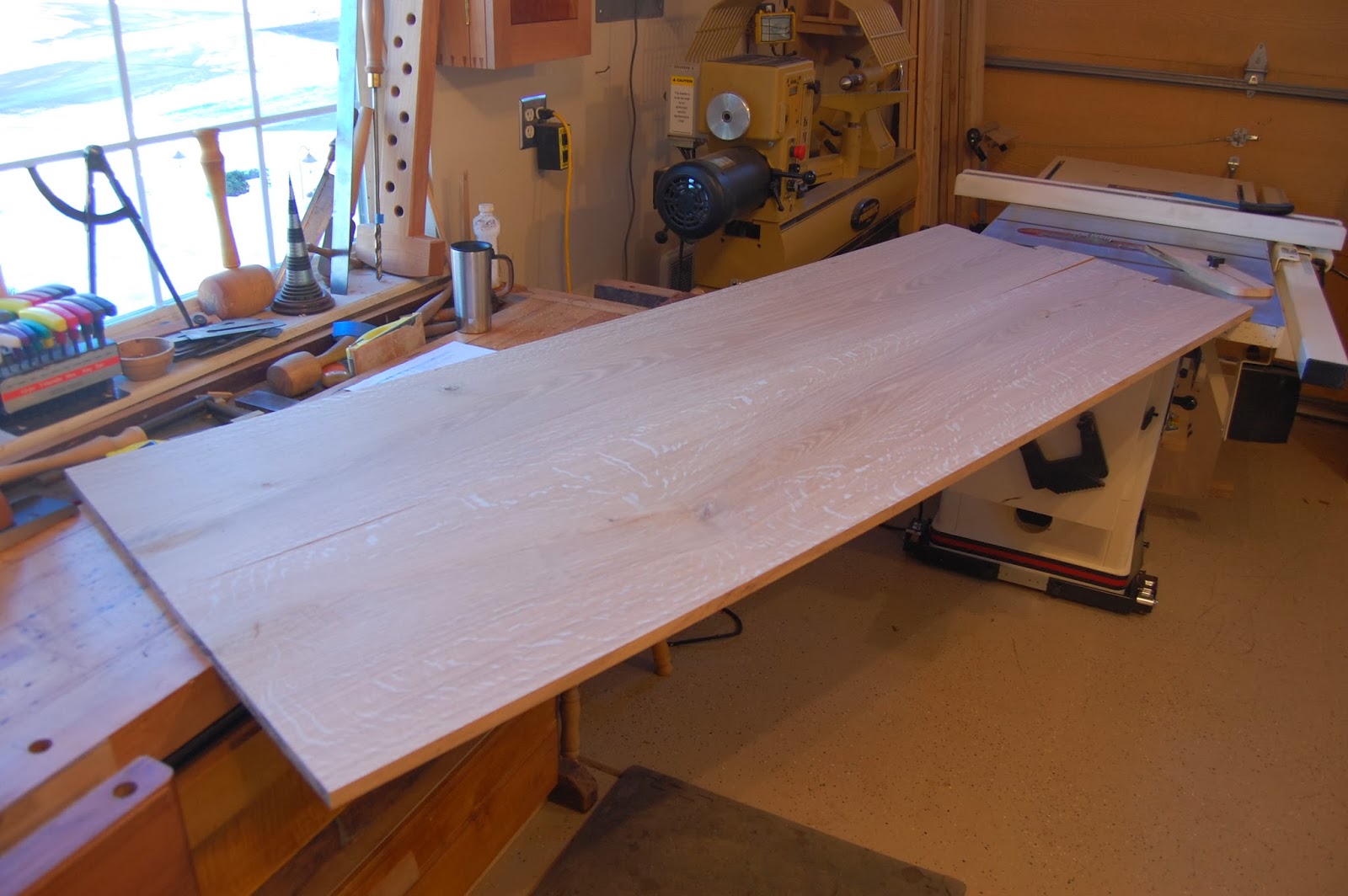 I want to get a very invisible joint so once I joined the edge on the joiner I flipped the boards on edge and hand planned the edge. If the boards are oriented correctly any out of square edge is reflected in the other board and are thus cancelled out.This gives you an excellent glue joint. 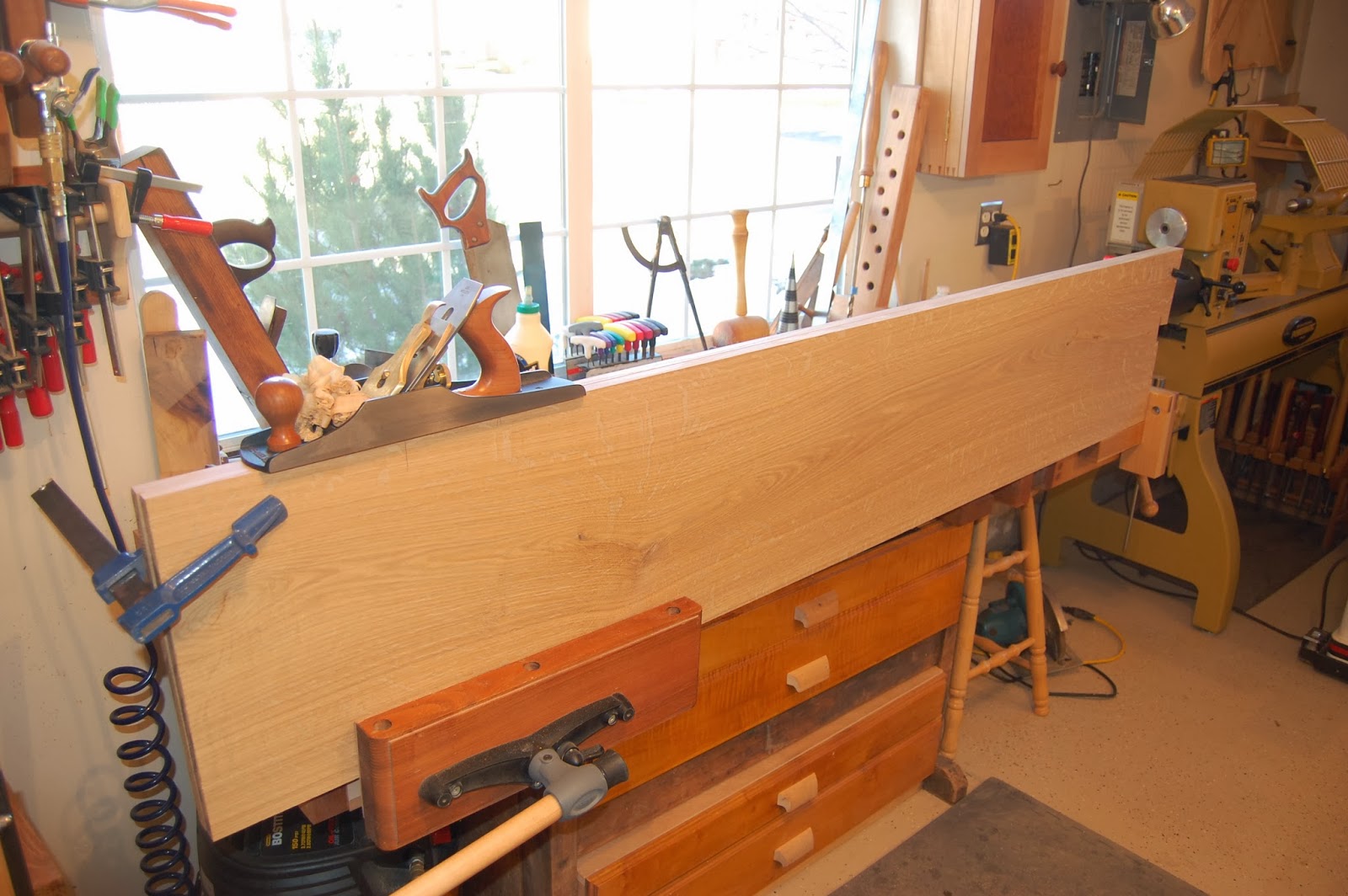 Because I couldn't run the glued up board through the planner I used a spline to make  sure the faces lined up. I usually don't do a joint this way as it just isn't needed, but these wide boards would need some help. I simply used a router and bit with a bearing. Milling up  the spine took a while as it had to be exactly right - tight, but not too tight.Also, you have to  not go all the way to the end as you don't want the spline to show. 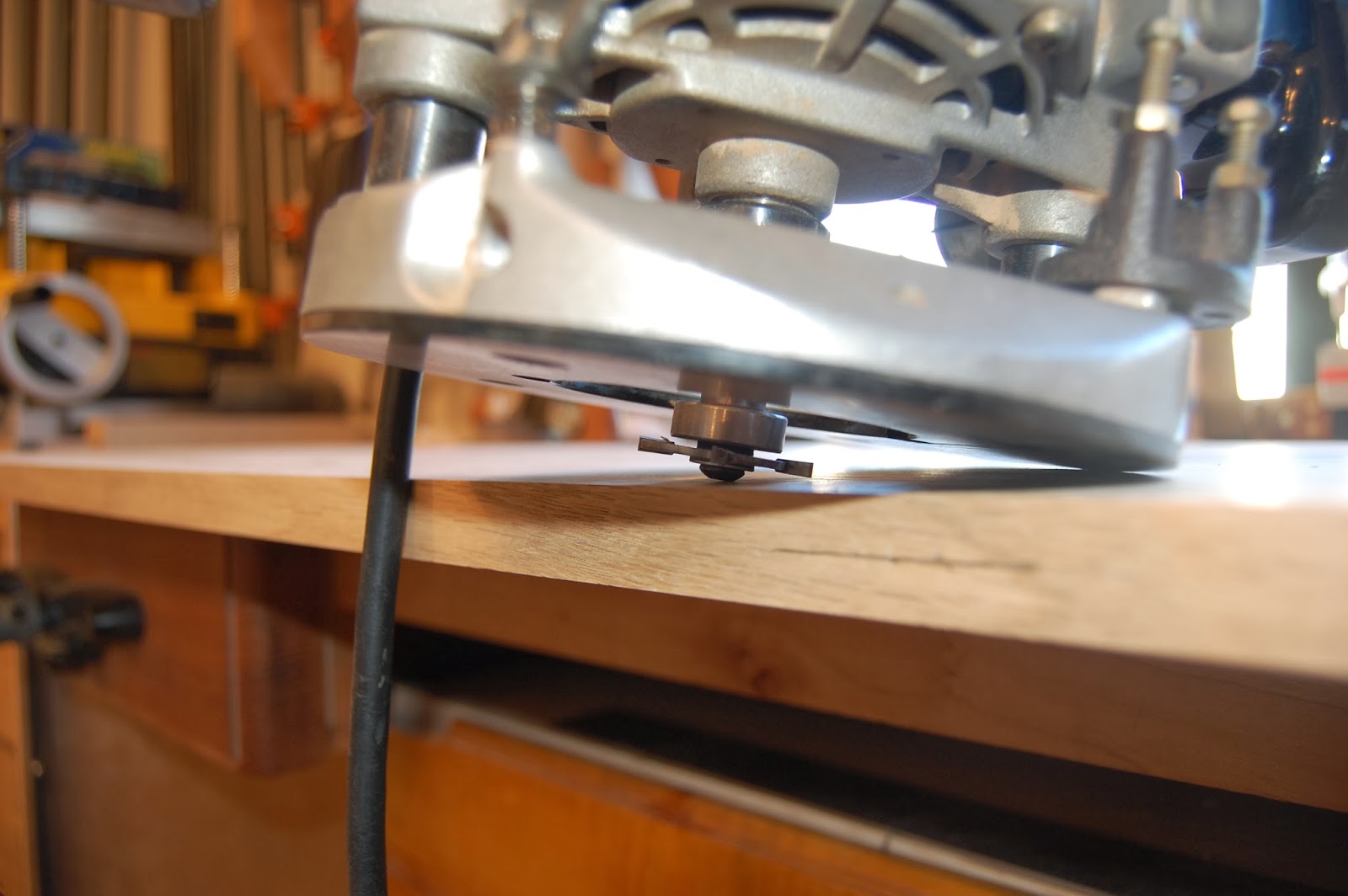 The glue up was easy after all the prep work. 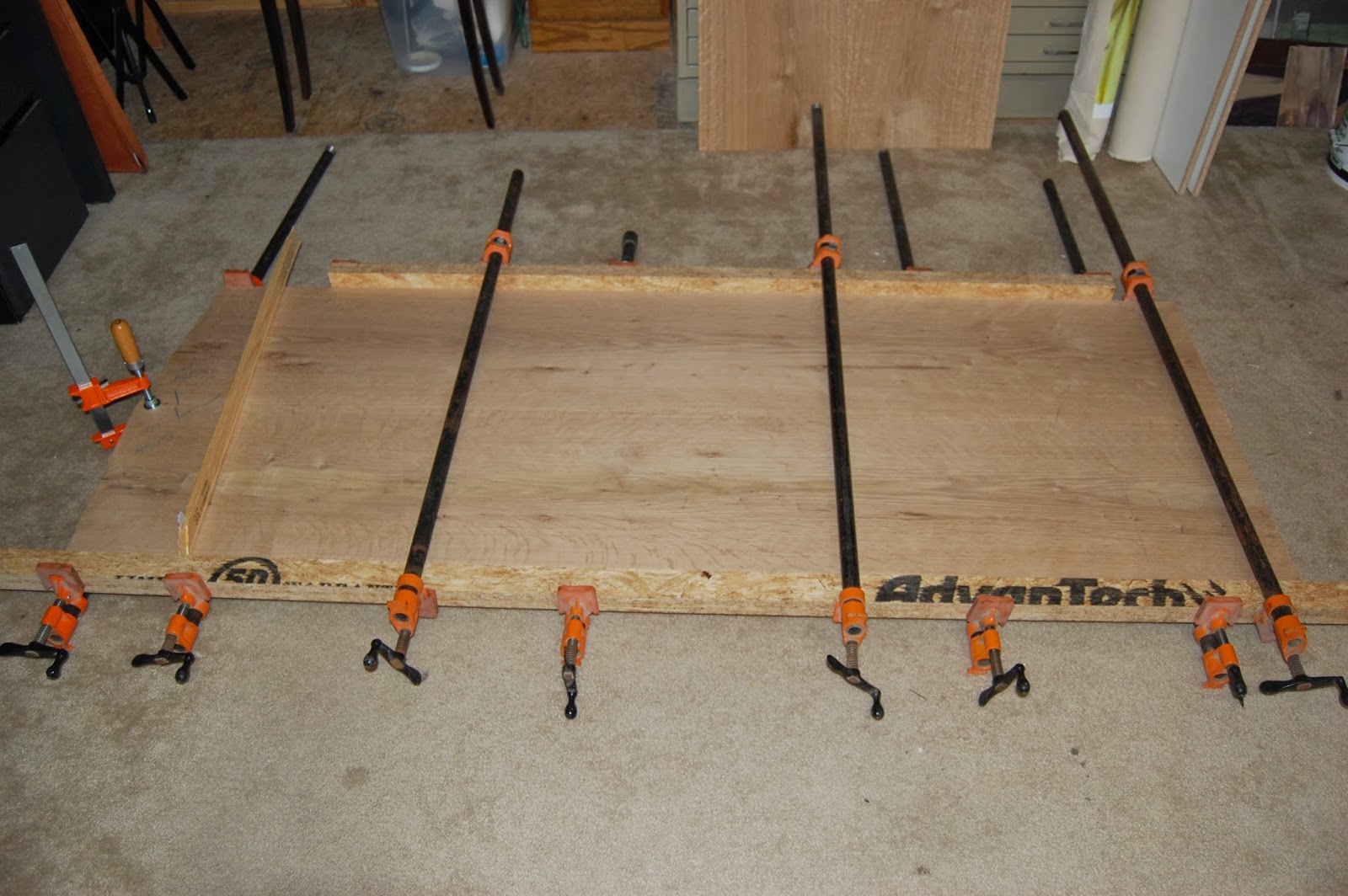 Next, I wanted to tackle the through tenons. I had thought about exactly how I wanted to do them for a while, but I had to work through the details. As for the size of the tenon, I used the golden ratio. The width is 3/4" so the length would be right at 1- 1/4". I spaced them about 2" apart per my eye. I spent a lot of time laying out all the lines and used a sharp marking knife. Once done with the layout,  I marked out the cut sections so I couldn't screw anything up. 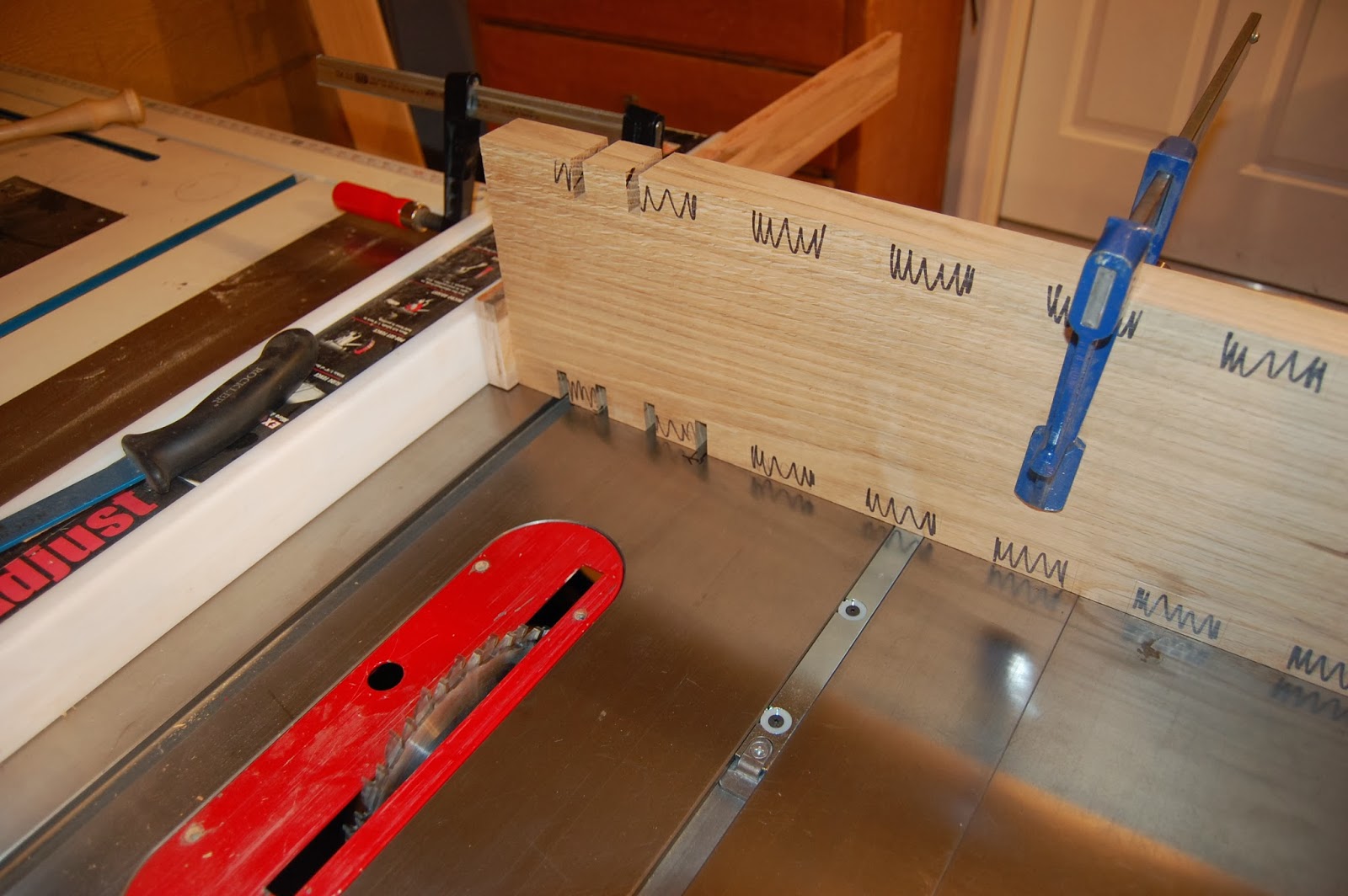 There are a number of ways to make these cuts, but I chose to use the table saw. I screwed the two pieces together so I could mill both at the same time. This also gives you a nice bearing surface to keep everything flat to the table. Mostly, it assures you that both pieces are exactly the same. Mark all the faces so you can orient everything the same in later phases.

I put a box cutting blade, rechecked everything for square and started cutting. I used the table saw fence to index each cut so I could unclamp and flip the board. As for height, I didn't worry about the tenon height, but the space between the tenons. This distance will establish the space inside the desk. I will have a 1/8" dado, so I had to add 1/4" to the overall space of 5 1/4". The tenons are long and I'll cut them once assembled  so I can see exactly how I want them. 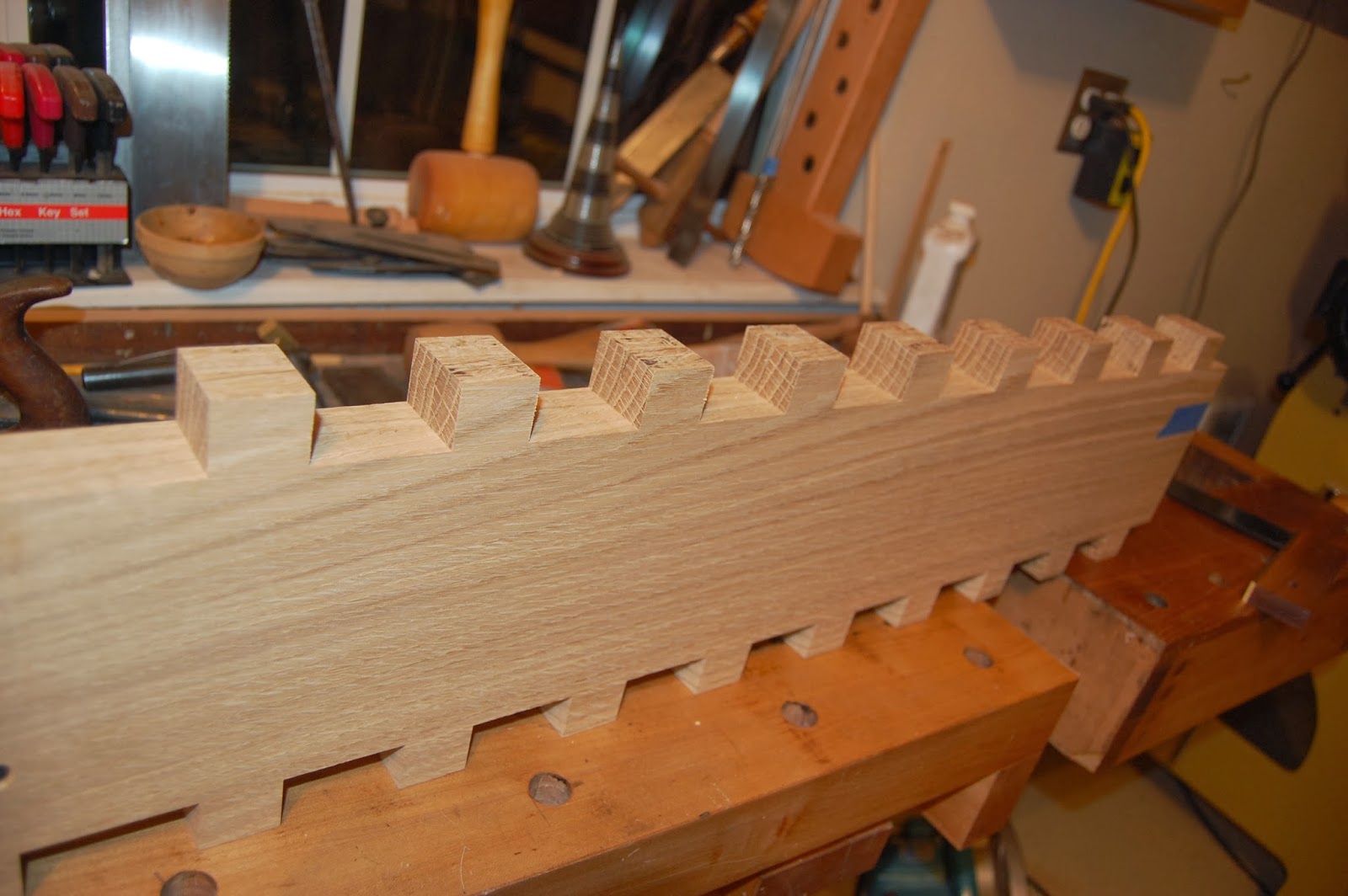 I was very happy with the result. The overall spacing between tenons could be as much as 1/64" off, at most, but I will deal with that in the next phase.

Next, I'll cut  the top and bottom to size, make a jig to cut all the mortices, and cut the mortices.