Day One - The Red Desert 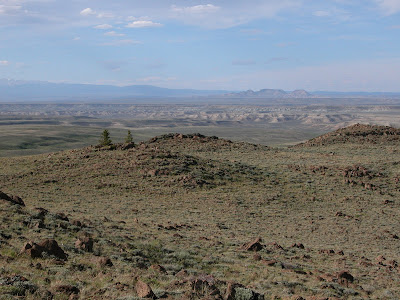 Well, I haven’t posted in a few days because we’ve been on vacation! So, I thought I would post as if we were on vacation. There simply wasn’t any internet for most of the vacation - Wyoming is known for its wide open spaces, not its internet access.

Day One –
We drove out of Denver headed north and west toward the Red Desert, the Great Divide Basin in south-western Wyoming. The Red Desert is an interesting and difficult place. It sits at the southern end of the Wind River Mountains at an average elevation of about 7000 feet composed of about 2.5 million acres, or 18,000 square miles. The continental divide separates into an eastern and western leg creating a basin from which no water escapes – not that there’s much to escape anyway. Geologically, it is an upraised and uplifted plateau worn down so that the oldest rocks in the US are now located at the surface. The largest active sand dune system in North America meanders across the Great Divide from the Jack Morrow Hills Study area to the Ferris Dunes, a distance of approximately 90 miles. Summer daytime temperatures bake the sand and clay soil, and in the winter zero is a warm day and thirty below is common. The wind rages day and night, day in – day out across the stunted sage. Before modern times it was uncrossable except on the north side hard up against the Winds. There, the Oregon Trail, the Overland Trail, the Cherokee Trail, the Mormon Pioneer Trail and the Pony Express Trail ran, and the land gave up its dust. 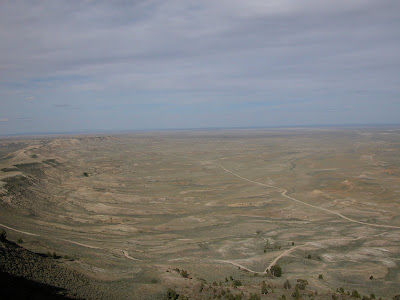 The price to pay was rough terrain and the land still bares the wagon tracks. Such legendary figures as Chief Washakie and Jim Bridger hunted here, outlaws such as Butch Cassidy and the Sundance Kid hid from the law here, and mountain men Jedediah Smith, Kit Carson and others explored the Red Desert before the West was settled. Pronghorn are the main large animal (50,000 use the greater Red Desert area), but there are wild horses and a herd of desert elk. The only herd of its kind any where in the world. We saw them headed across the sage, south toward Table Rock.

The twenty-first century has drilled most of the basin for oil and wells dot the central basin; however, there are still areas of wonder and of history. I was part of early oil boom there in 1980 driving an oil tanker to keep the rigs running. It was there, in May 1980, that I saw the sun go down twice! I was driving west about 80 miles from the road and evening came and it got dark quickly- night descended. I thought nothing of it. After some time, the sun “rose” bright and red like a morning sunrise. It set again shortly there after. I found out after I got home that night Mt. Saint Helens had erupted. The sun had been blotted out and then peeked out from underneath the ash to then actually set.

We drove toward Steamboat mountain, across the alkali flats, through the dunes, and around the buttes, hunted fossils, and visited the tri-territory site. The plaque there says this:

This site, where the Continental Divide crosses the 42 degree parallel, North Latitude, was first claimed by Spain through the presumptive right of early discoveries and explorations. The area was also a part of Acadia, granted in 1603 by Henry IV of France, and part of New England as granted to the Plymouth Colony by James I, transferred to the Massachusetts Bay Colony in 1629. In 1682, LaSalle claimed for France the whole basin of the Mississippi River (thus including the northeastern portion of this site).

France ceded its claim to Spain in 1762 but regained them in 1800 and sold the region of “Louisiana” to the United States in 1803. 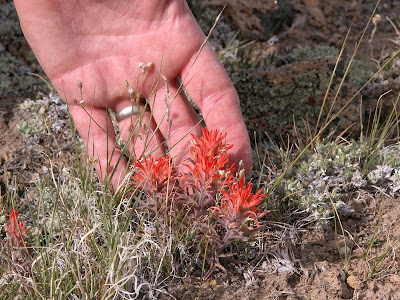 We spent the night in the shade of Steamboat mountain among aspen, and springs, deer, and tall grass. I suppose there aren't any trees in some directions for more than 175 miles, but it was a wonderful oasis. On top of Steamboat the weather is so grim, even the paintbrush (which I have seen grow anywhere) are stunted and small. The quiet is astounding, there is a complete absence of any lights - any direction. It is open country - about as open as it gets. I love it there. Someday I want to spend many weeks there. Tomorrow, we explore some of the neat stuff. 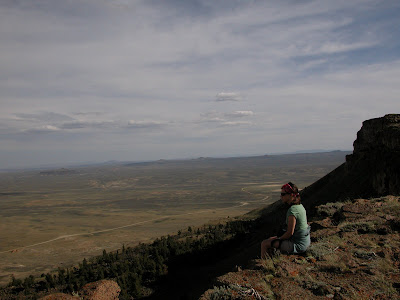 Labels: get out there, travel, western history, Wyoming Trip