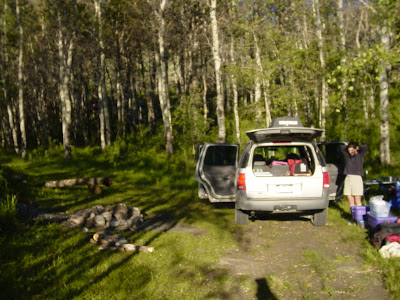 The day started early in our little green glen in the Red Desert. In 1877 the Hayden Expedition passed through this area, noting Steamboat Mountain's aspen grove and clear, flowing springs and they seemed ever the same as 140 years ago. Upon packing the car we headed south off of Steamboat Mountain and directly west over the divide yet again. This was the 4th crossing. We were headed to the largest of the dunes; Killpecker Sand Dunes, so Bridger could see them.

On the way we were surprised by a few of the resident elk. These elk are not the same herd that was noted by hunters back in the nineteenth century. Settlement and hunting wiped out most of those animals by the 1940s, when the Wyoming Game and Fish Department transplanted 86 elk from the Jackson area to the vicinity of Boar's Tusk and the Killpecker dunes. Wildlife managers hoped the elk would migrate back and forth from the Jackson area, as they had historically, which would reduce the necessity for feeding them through the winter at the National Elk Refuge, but they stayed on and are now part of the landscape. Some additional elk do migrate down from the southern end of the Winds to winter on the high plains near Oregon Buttes - we camped there on our last trip up to Pinedale. The Oregon Buttes retain the name given to them by the passing settlers bound for Oregon and California, but the trail itself is off some distance to the north. 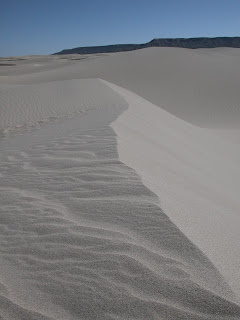 Killpecker dunes move during the winter covering up drifting snow blown by the howling winds thus creating a natural refrigerator which releases moisture during the summer creating little ponds around the bottom of the dunes. Dune beetles and various rodent tracks suggest quite an active ecosystem. I'm sure larger predators inhabit the night as the desert is home to many unique species. We played on the dunes for about an hour and headed toward the boars tusk.

The boars tusk is a volcanic neck; a remnant of a volcano that erupted, slowed, plugged itself up, and then eroded so that all that remains is just the central tube. While we explored the cone made of tuff and basalt the resident hawks scolded us for approaching their lofty home. This desert is home to the highest raptor densities in the country. 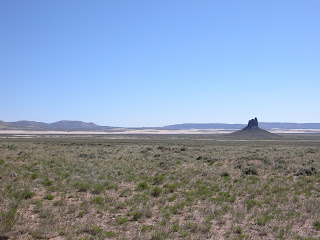 I had hoped to find some petroglyphs located nearby on White Mountain, but we were unsuccessful. Now, off north to Names Rock via the Oregon Trail and the Green River.

Bridger, as most everyone knows, is named for Jim Bridger, one of the most famous trappers and explorers of the early west. There is quite a bit around Wyoming named in honor of him. The largest being Bridger-Teton National Forest. He traipsed around these parts quite a bit and he signed his name in rock near modern day Labarge. I wanted Bridger to see it. We headed west across the high desert and met up with the Oregon Trail. As a matter of fact, Jim Bridger is credited with establishing the Wyoming section trail for the Mormons. We passed by the spot near the Little Sandy that, in 1847, Jim Bridger met Brigham Young to discuss the route to Salt Lake. Bridger, according to legend, offered $1000 for the first bushel of corn grown in Salt Lake as he discouraged the entire venture.

The book "Wagons West", by Frank McLynn, paints the clearest picture of the struggle these early 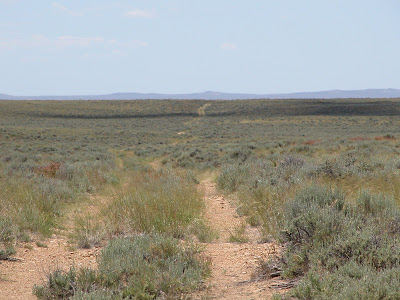 settlers faced. Manifest Destiny pushed these men and woman to great extremes and it can be appreciated no better than while standing in the very tracks of the wagons, feeling the heat, smelling the sage, and feeling the wind blow from the far away buttes days and days away. The push into the unknown was an extreme act and the price was suffering, suffering, and more suffering. This picture is near modern day Farson, some distance before crossing the Green very near Simpson's Hollow where, in 1857 the Mormons burned 52 Army supply wagons to keep them from reaching Salt Lake. The plan was successful and the Army never reached the settlement - a peaceful solution was found.

On the way to Names Rock we stopped along side the Green flowing through the high desert. There are many fossils located in this area, but we simply didn't have time to stop and throughly explore the area, which of course being Wyoming is rather large. I think we were about 80 miles from the Boars Tusk. There is a large wild life refuge located around this area and between that the water there are a lot of animals. 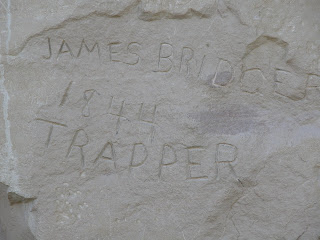 We continued on the Names Rock and then on to Pinedale. Our first stop was the Mountain Man Museum; quite a little gem, dedicated to the mountain man and the early west. Jim Bridger's rifle is here and Bridger really wanted to see that. We bummed around town, looked up an old Friend, and ate out at Fremont Lake. Fremont Lake is the second largest lake in Wyoming as well as one of the deepest lakes (600 feet) in the United States. Pleistocene glaciers of the Bull Lake and Pindale glacial periods carved out the valleys in this area and deposited terminal moraines that dammed the mountain waters. Fremont, New Fork, Half Moon, Boulder, and Willow Lakes all formed in such a manner.

The massive glacial moraines surrounding Fremont Lake are classic examples of moraines formed by alpine glaciation. This moraine is visible in the right hand side of this picture of the lake. I will write about the Bull Lake and Pinedale glacial periods when we visit Yellowstone.

We spent the night at Soda Lake, but driving out there we saw several fox cubs and we watch them for quite some time. The ticks were the worst I have ever seen, but the view wasn't too bad - double click to see it best. Tomorrow, Jackson Hole. 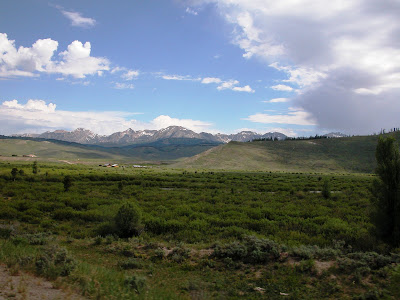 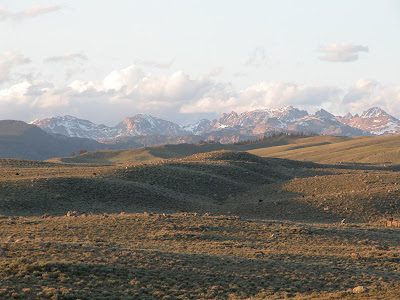