It took about an hour to select the wood. You might imagine picking boards off of a pile, but it isn't that simple. Wood, when cut, tends to bend and twist if it isn't carefully selected, so I'm looking at the grain for many characteristics so the table doesn't tie itself in knots when complete. It is advantageous to select boards from one tree, but I don't have that luxury so I have to look at color and grain too. All kinds of different grain will look odd and tend to break-up the overall look calling attention to each individual piece of wood. 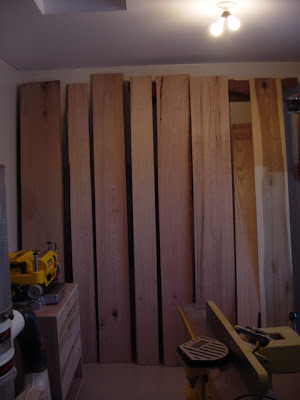 Here's the stack. It doesn't look like much - yet. Now, I have to go through and mark each cut so as to plan the use of the wood effectively. Again, I want the the quartersawn pieces in certain places and certain grain in other pieces.

I am using 1/2, 3/4, 1, and 1-1/2 inch pieces. Each piece will be milled to thickness using a planner, then joined on one edge so as to have one straight edge to begin ripping on the tablesaw. This process actually takes a quite a bit of time. Once complete I start cutting the individual parts. This is a few of the parts for each of the side where I will start. Next, I start milling the tenons on the parts that need them. 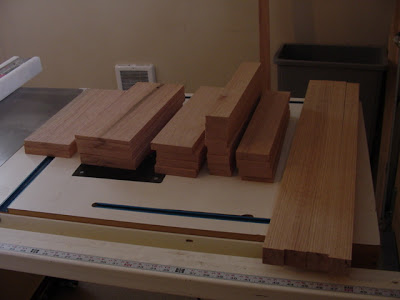 The requires a lot of work on the tablesaw. First I set-up a machine that holds the wood so I can mill the cheeks of each tenon. You can see the first two cuts on the end of the one of the side pieces. Two more cuts complete this operation. Each tenon must be very precise so the glue is not squeezed out, or the fit too loose. It is common to work at tolerances of .01. 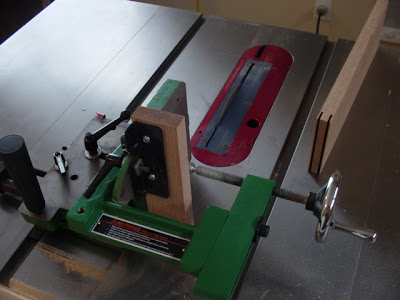 Next, I cut the shoulder of the tenons. As you can see the tenons are smaller than both the width and depth of each piece. This makes for a clean look when assembled. If the mortise was cut to the full size of the board a ragged edge would show and it would be difficult to control the width when clamping. 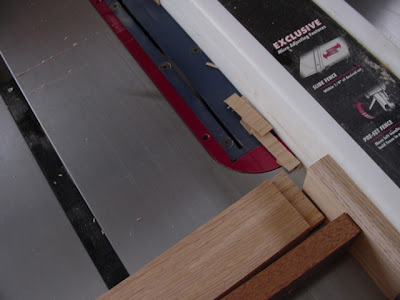 Next a grove gets milled in each leg to accept the tenon and the 1/2 inch panels that go between each rail. This picture show some of the pieces after finishing this phase. 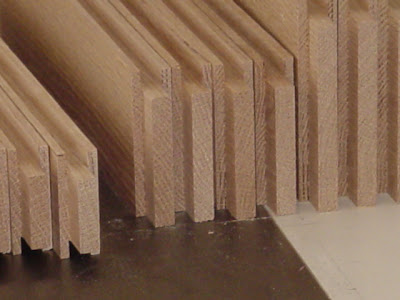 The next picture shows the end of an assembled panel. I won't glue this until much later - it is just stuck together for now. Look closely and you can see that each thin panel (1/2 inch) can move in the space between each rail. Also you can see the tenons of each rail even with the panels which will fit into a groove on each leg. 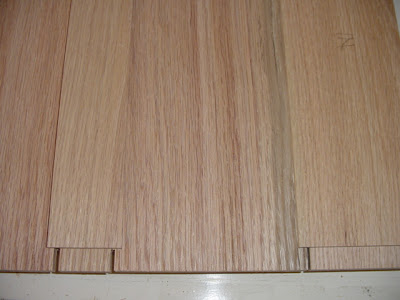 nd panels. The first parts, the sides, are now complete. This is how the sides will look - two on each stand. I still have work to do to the legs, but the side panels (after final fitting by hand) are ready to assemble. The back of each stand is made the same way, with poplar though. Poplar is cheaper and backs won't show and poplar was customarily used in this period. In cabinetry, this is called a secondary wood.