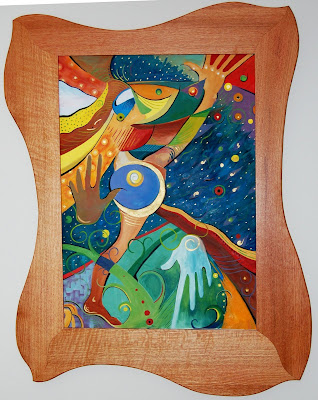 I thought that I would do a series on picture frames having done the previous post. I get a fair number of hits on the blog for woodworking. Oddly enough wood movement seems to be the most popular. Tendons come a close second. As Tammi is an artist, I've made quite a few frames and have perfected a way of making very cheap ones. I'll cover those next post.

Getting anything framed is a serious investment; however, shop-made frames don't cost too much. Some can even be made for a few dollars. One of the essential elements is design. Time spent in design always pays off. Responding correctly and appropriately to the artwork is essential. Always remember that it is the art that's primary. A frame just shows it off.

Tammi needed a frame for one of her early shows and the painting clearly called for an unusual frame. This is a large painting - just about four feet tall. Tammi came up with an idea and I tried to carry it out. This crazy frame what we came up with in the end. (Double click for a larger view.) The wood is riftsawn oak and came from one board. I found the board at Home Depot while looking for something else and scarfed it up. At a mill it would have gone for many times the price of normal or flat sawn oak.

The point of this frame is that, expect for the curved miters, it is very simple. The painting is held with a simple rabbit which I milled before cutting out the curves. The outer edge is rounded over with a 3/8 roundover bit. The finish is simple Danish Oil, but before putting on the oil I rubbed in red pigment. Thus, the frame has a very subtle red color. With a very complex painting a simple frame works very well. Keeping away from complex wood grain is critical. If you used these curves with a complex grain, the painting would be overcome and the striking curves lost in the conflicting grain. 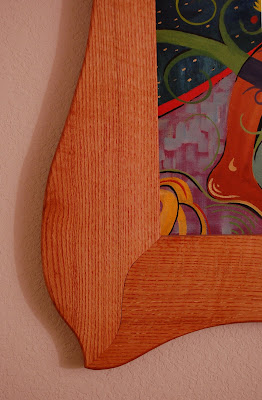 What is unusual about this frame is the curved miters, but keeping away from straight lines is what really makes this frame sing. I made the curved miters by making a full-sized template of the entire design out of 1/4" plywood. I laid out the full frame and cut the template out, one miter both sides at a time. I had to layout the frame slightly larger than needed to account for the cuts. Thus each miter mirrored the other side. I then worked each side of the miter until both fit tightly as the width of the blade forced the "low points" and "high points" apart. Once all four miters (eight sides) were tightly fit I laid the four templates along the board and marked the board. After cutting out the oak about 1/4" wide of the line I used the template as a router guide and cut left, right, top, and bottom out with the router. I used double sided tape to adhere the plywood to the oak.I assembled the frame using biscuits located on some of the straiter curves. 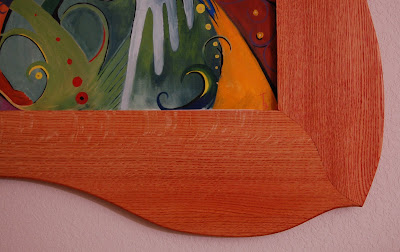 I like to hang around Tammi's paintings at the openings and listen to the comments. During this opening two men who where quite obviously gallery owners spent some time in front of Tammi's painting. After discussing it at length, one said, "I like the painting, but I could never sell the $800 frame." Wrong, she didn't spend that kind of money, but she does have to put up with me.