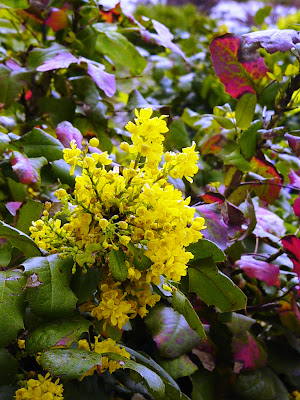 Spring has been slow in coming here in Denver, or at least our house. We sit high on a ridge south and east of Denver at about 6000 feet so spring comes at our house a bit later than even Denver. 800 feet make a big difference in terms of temperature and, in the spring, late snowfall. We received a lot of late snow (which melts in a day or two), and quite a bit cool weather. It's actually been nice to have a gradual temperature change from winter. The days have been in the mid-60's, so it might not be so cold as one might think; besides the sun at 6000 feet, whenever it shines, really puts out the heat!

Well anyway, spring is in the yard. The Oregon Grape (Mahonia aquifolium) is blooming nice big yellow blossoms. Perhaps, we'll get some small grapes in the fall. I love the red and green variations in the waxy leafs. 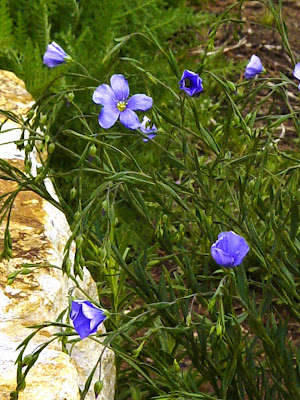 They're growing all over in nice blue patches. Its wiry, arching stems support a profusion of delicate, simple five petal, blue flowers which bloom for quite some time. And, it resists heat and will tolerate drought.

It seems the iris is up a bit early. I have a dwarf variety (Iris reticulata) 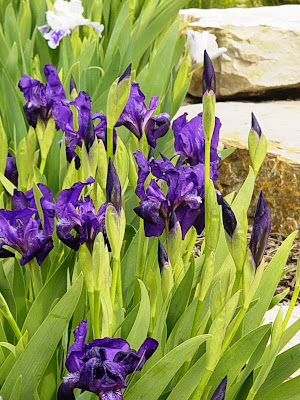 in deep purples, mid-purple, and white. I have always been enthusiastic abut irises and remember them fondly in my grandmother's garden. These bloom quite a long time and the foliage isn't quite so large, so it doesn't dominate the summer garden too much. This picture reminds me of Van Gogh's Irises. It has the same qualities of the painting. Perhaps, it is just the purple. He painted a number of iris paintings after he checked himself into the loony bin. They were obviously the thing that caught his eye. Tammi says she wants to paint them too - perhaps I should keep out a close eye...

Of course, the grape hyacinth (Muscari armeniacum) is up too. At least what the rabbits didn't get to - that's an on-going battle. I want to rain death and destruction on the jumping, fur covered, nasty, mass producing, bastards. I can't even get started on the little rodents - my blog would get black-listed.

As you can see, I like purple and yellow. I purposefully picked plants with these colors because they are complementary colors (opposite on the color wheel). A garden is most appreciated for its color, but when picking the plants and planning the garden people seldom pay attention to that color and how works together. It's like matching clothes, or painting a room - how the color works is very important to the artistic and ascetic quality. For example; red, purple, and pink just don't work too well though they are often lumped together in a group of plantings. Besides color, leaf type and size are important. Thinking about how the eyes moves across the canvas; that is creating "waves" and "flow", is an important consideration too. That effect can range from formal, to wave-like, and even into crazy - where the effect is somewhat jarring visually. The important point is forethought.

Anyway, it's nice to see the flowers. Soon, the mountains will be blooming too - that's the true show! 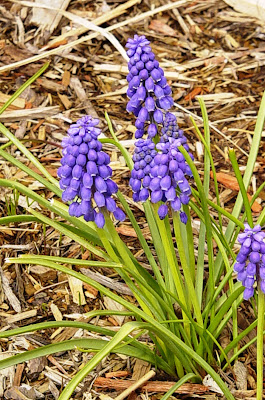